Economic Costs of the Iraq War

The Iraq war is costing about a trillion dollars and it could easily drag on as Viet Nam did for another decade. This has lead to massive deficits. 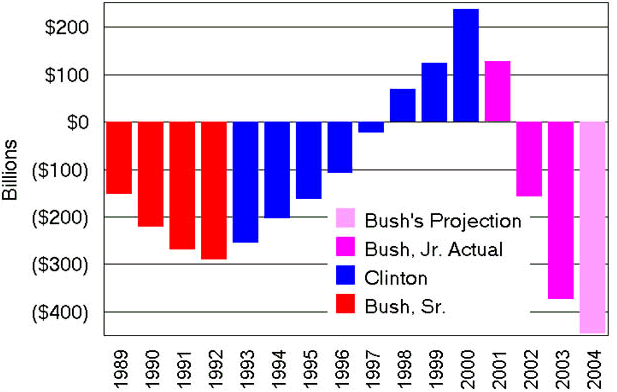 In addition because of outsourcing, the USA, a former net exporter, had a $800 billion trade deficit in 2005. It imported $800 billion more than it exported. In 2006 this is projected to grow to $1 trillion. This shortfall is one of the factors causing the buying power of the US dollar to collapse.

Military spending has dried up other government spending, meaning lost jobs. The Bush administration has encouraged outsourcing with further destroys jobs. See what a mess Bush has made of the job situation in this chart: 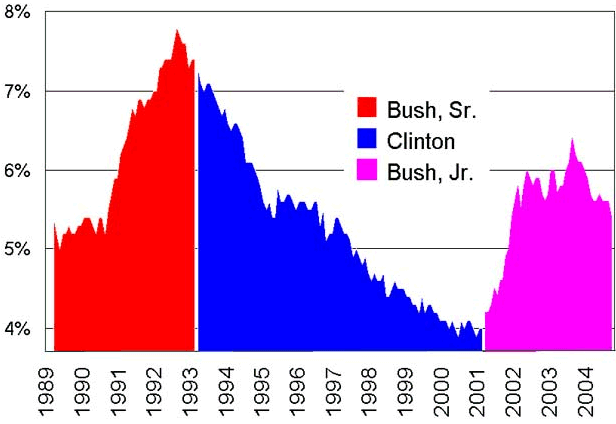 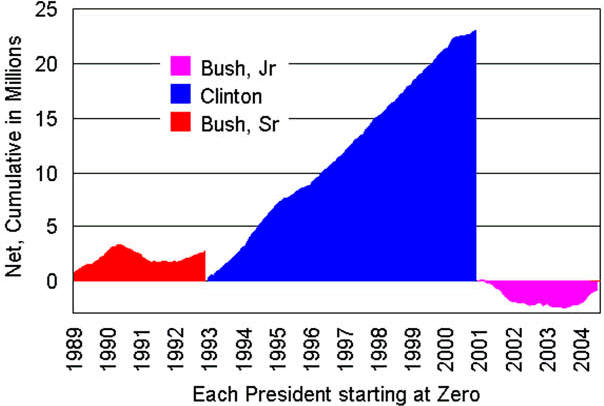 To keep up with population growth, in his first term, Bush needed to create jobs for 12 million new people. He had a net job loss the first time since the great depression and Herbert Hoover.

Bush has the biggest deficits of any president in history and is the first president in over a century to actually destroy more jobs than he created.

I contend the USA is ridiculously overspending on the military, all out of proportion to the threat. For example, even back in 2003 before the USA doubled its military spending, it was still spending more than all the other countries of the earth combined. There is no way that sort of expenditure is justified purely for defense. Note that the bogeymen the USA claims to fear, Iraq and Iran are not even on the map.

Military spending has already bankrupted the country in the sense that even future generations will not be able to make good on the outstanding debt according to Professor Laurence Kotlikoff of Boston University speaking for the Federal Reserve Bank of St Louis, a leading constituent of the US Federal Reserve.

You see a slightly different picture when you took at per capita spending. The USA in then not quite so overwhelming. The pugnacious Israel shows her true colours. Of course, that level of military spending would be impossible if the USA did not give 1/3 of its total foreign aid budget to Isreal for military spending. Keep in mind that since these stats were taken, the USA has greatly increased its per capita spending to cover the costs of the war in Afghanistan, the Iraq war and the costs of the homeland security bureaucracy. Here are the 2003 figures. 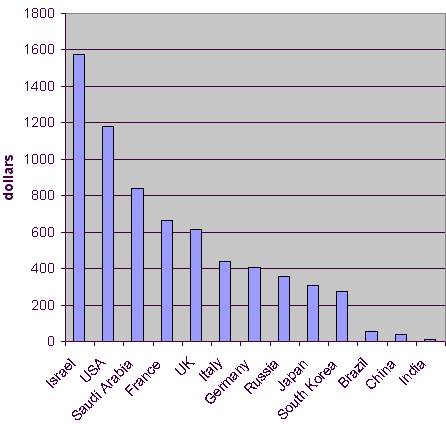 The USA has military bases in almost every country on earth. There are obviously not for defending the homeland, but for defending America’s economic interests abroad.

Why Have an Empire?

Inequalities in consumption are stark. Globally, the 20% of the world’s people in the highest-income countries account for 86% of total private consumption expenditures — the poorest 20% a minuscule 1.3%. More specifically, the richest fifth: Runaway growth in consumption in the past 50 years is putting strains on the environment never before seen.
~ Human Development Report 1998 Overview, United Nations Development Programme (UNDP)

Most Americans are astonished when academics such as Chalmers Johnson or Noam Chomsky explain to them they have a global empire in everything but name.

The point of this empire is to support a lavish consuming lifestyle at the expense of the third world. The American military’s job is to pressure foreign governments to give American businesses what they want. How else could it be that Americans manage, with under 6% of the world population, to consume about a 40-60% of the planet’s resources? How is it possible that people in other parts of the world accept a $0.06 a hour wage to produce goods for Americans. That is less than slave wages. Slaves, like livestock, at least had their food and medical bills covered and even a form of retirement.

Calculations show that the planet has available 1.90 hectares (4.70 acres) of biologically productive land per person to supply resources and absorb wastes — yet the average person on Earth already uses 2.30 hectares (5.68 acres) worth. These ecological footprints range from the 9.70 hectares (23.97 acres) claimed by the average American to the 0.47 hectare (1.16 acres) used by the average Mozambican.
~ WorldWatch.org

Like a French aristocrat of old, the modern American believes he fully deserves his privileged position as a right of birth. He deserves it for being American, one of God’s chosen people. He vaguely imagines that his industriousness or other innate virtue fully explains the economic disparity. He labours under the delusion that those in the rest of the world are happy to work in American sweat shops. It never enters his head that such extreme inequality can only be maintained by global military oppression and state-sponsored political corruption to bribe and threaten world leaders to act in the interests of American business rather than the interests of their own countries.

The main difference in the outcome of WWII (World War II) was the language we speak. The economic neocolonialism is the same as had the Nazis won. Just as Nazis saw themselves as innately superior and deserving of special privilege, so do Americans. They don’t recognise that their superiority complex is just as odious to others and leads them to just as evil deeds. 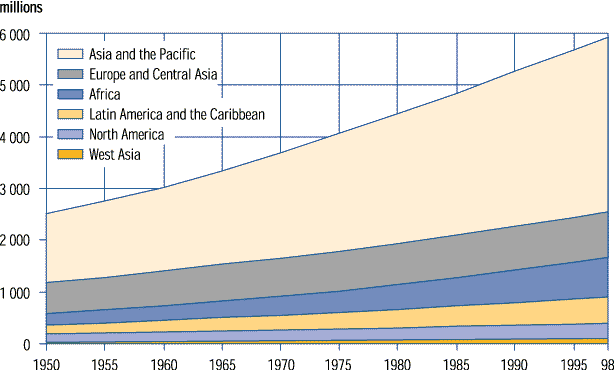 You can see from this graph of world population growth the incredible extra burden we are putting on the earth’s carrying capacity, especially in Asia and the Pacific. There are ever more people fighting for a dwindling supply of resources.

Bush presided over a $3 trillion dollar embezzlement and covered it up. The war is a cover for massive embezzlement. Bush lost/embezzled $3 trillion from the Pentagon. Not $3 billion, $3 trillion, that is $3,000 billion, 10 Iraq wars worth or $40,000 per US family. The complicit Bush-friendly media kept mum about the biggest theft in history, though months later the San Francisco Chronicle finally covered some of it. Most people are astounded to learn that Rumsfeld confessed to the loss on camera and excused it as an accounting error. Unfortunately all trace of this video has disappeared from the Internet. I spent hours trying to find a copy. It was available for many months on C-SPAN originally. You really need to see the original video to understand how Rumsfeld squirmed. Part of the problem in tracking this down is that McKinney has repeatedly tackled Rumsfeld on this issue.

Note that neither Mr. Jonas nor Mr. Rumsfeld dispute this in the transcript.

8.8 billion dollars earmarked for the Iraq war have also been embezzled, or in Bush speak is improperly accounted for. And, of course, Iraq’s own oil money went missing as well.

The war has caused record deficits. Bush has improperly raided the social security fund to partly cover up his spending bloat.

Table data from Crossing The Rubicon page 499. The embezzlement/missing figures for subsequent years have not yet been released yet.

Perhaps even more startling than the missing trillions is that Bush appears to have bankrupted the country on purpose. To discover why read his brother Jeb’s essay.

This may explain why brother George seemed to be intentionally attempting to tank the economy.

To bring about a genuine political realignment, Republicans must kill the Government Goose that Lays the Golden Eggs — the very Goose they have fought so hard and long to possess.
~ Jeb Bush (1953-02-11 age:65) Imprimis Magazine 1995

In other words, Jeb wants to stop the functions of government that create prosperity. The man is either nuts, or has the same problems with English as his brother.

We mustn’t assume that we are going to deinvent government solely from inside the Beltway or within one or two sessions of Congress. We will do it one step at a time, in one community at a time – at the local level and through local institutions like churches, nonprofit and volunteer organizations and families.
~ Jeb Bush (1953-02-11 age:65) Imprimis Magazine 1995

Jeb wants to destroy democratic government and hand the reigns to private corporations, much the way society was organised in the 1800s, without any regulation on the robber barons. He must have been impressed by the 1975 sci if movie, Rollerball, starring James Caan.

Tom Delay, who was House Majority Leader at the time, echoes his desire to bankrupt the US federal government in this video,