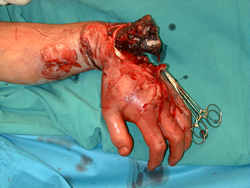 Is it possible that a few rich men — a small class of men — have persuaded a million poor men to attack and attempt to destroy another million men as poor as they, so that the rich may be richer still?

They told them that this brutal war was the destiny of the race. It was for the glory of the emperor; it was for the honour of the state; it was for their king and country. False — false as hell! They make war to capture markets by murder, raw materials by rape. They find it cheaper to steal than to exchange, easier to butcher than to buy. This is the secret of war. It is the secret of all wars: profit.

Threaten a reduction on the profit of their money and the beast in them awakens with a snarl. They become as ruthless as savages, brutal as madmen, remorseless as executioners.
~ Dr. Norman Bethune (1890-03-04 1939-11-12 age:49)

The kerosene lamp overhead makes a steady buzzing sound like an incandescent hive of bees. Mud walls. Mud floor. Mud bed. White paper windows. Smell of blood and chloroform. Cold. Three o’clock in the morning, December 1, North China, near Lin Chu, with the 8th Route Army. Men with wounds. Wounds like little dried pools, caked with blackbrown earth; wounds with torn edges frilled with black gangrene; neat wounds, concealing beneath the abscess in their depths, burrowing into and around the great firm muscles like a dammed-back river, running around and between the muscles like a hot stream; wounds, expanding outward, decaying orchids or crushed carnations, terrible flowers of flesh; wounds from which the dark blood is spewed out in clots, mixed with the ominous gas bubbles, floating on the fresh flood of the still-continuing secondary haemorrhage.

Old filthy bandages stuck to the skin with blood-glue. Careful. Belief moisten first. Through the thigh. Pick the leg up. Why it’s like a bag, a long, loose red stocking. What kind of stocking? A Christmas stocking. Where’s that find strong rod of bone now? In a dozen pieces. Pick them out with your fingers; white as a dog’s teeth, sharp and jagged. Now feel. Any more left? Yes, here. All? Yes; no, here’s another piece. Is this muscle dead? Pinch it. Yes, it’s dead, Cut it out. How can that heal? How can those muscles, once so strong, now so torn, so devastated, so ruined, resume their proud tension? Pull, relax. Pull, relax. What fun it was! Now that is finished. Now that’s done. Now we are destroyed. Now what will we do with ourselves?

Next. What an infant! Seventeen. Shot through the belly. Chloroform. Ready? Gas rushes out of the opened peritoneal cavity. Odour of feces. Pink coils of distended intestine. Four perforations. Close them. Purse string suture. Sponge out the pelvis. Tube. Three tubes. Hard to close. Keep him warm. How? Dip those bricks into hot water.

Gangrene is a cunning, creeping fellow. Is this one alive? Yes, he lives. Technically speaking, he is alive. Give him saline intravenously. Perhaps the innumerable tiny cells of his body will remember. They may remember the hot salty sea, their ancestral home, their first food. With the memory of a million years, they may remember other tides, other oceans and life being born of the sea and sun. It may make them raise their tired little heads, drink deep and struggle back into life again. It may do that.

And this one. Will he run along the road beside his mule at another harvest, with cries of pleasure and happiness? No, that one will never run again. How can you run with one leg? What will he do? Why, he’ll sit and watch the other boys run. What will he think? He’ll think what you and I would think. What’s the good of pity? Don’t pity him! Pity would diminish his sacrifice. He did this for the defence of China. Help him. Lift him off the table. Carry him in your arms. Why, he’s as light as a child! Yes, your child, my child.

How beautiful the body is: how perfect its pads; with what precision it moves; how obedient, proud and strong. How terrible when torn. The little flame of life sinks lower and lower and with a flicker, goes out. It goes out like a candle goes out. Quietly and gently. It makes its protest at extinction, then submits. It has its day, then is silent.

Any more? Four Japanese prisoners. Bring them in. In this community of pain, there are no enemies. Cut away that blood-stained uniform. Stop that haemorrhage. Lay them beside the others. Why, they’re alike as brothers! Are these soldiers professional man-killers? No, these are amateurs-in-arms. Workman’s hands. These are workers-in-uniform.

No more. Six o’clock in the morning. God, it’s cold in this room. Open the door. Over the distant, dark-blue mountains, a pale, faint line of light appears in the east. In an hour the sun will be up. To bed and sleep.

Is it possible that a few rich men, a small class of men, have persuaded a million men to attack and attempt to destroy, another million men as poor as they? So that these rich may be richer still? Terrible thought! How did they persuade these poor men to come to China? By telling them the truth? No, they would never have cone if they had known the truth, Did they dare to tell these workmen that the rich only wanted cheaper raw materials, more markets and more profit? No, they told them that this brutal war was The Destiny of the Race, it was for the "Glory of the Emperor, it was for the Honour of the State, it was for their King and Country."

The agents of a criminal war of aggression, such as this, must be looked for like the agents of other crimes, such as murder, among those who are likely to benefit from those crimes. Will the 80,000,000 workers of Japan, the poor farmers, the unemployed industrial workers — will they gain? In the entire history of the wars of aggression, from the conquest of Mexico by Spain, the capture of India by England, the rape of Ethiopia by Italy, have the workers of those victorious countries ever been known to benefit? No, these never benefit by such wars. Does the Japanese workman benefit by the natural resources of even his own country, by the gold, the silver, the iron, the coal, the oil? Long ago he ceased to possess that natural wealth. It belongs to the rich, the ruling class. The millions who work those mines live in poverty. So how is he likely to benefit by the armed robbery of the gold, silver, iron, coal and oil from China? Will not the rich owners of the one retain for their own profit the wealth of the other? Have they not always done so?

It would seem inescapable that the militarists and the capitalists of Japan are the only class likely to gain by this mass murder, this authorized madness, this sanctified butchery. That ruling class, the true state, stands accused.

Are wars of aggression, wars for the conquest of colonies, then, just big business? Yes, it would seem so, however, much the perpetrators of such national crimes seek to hide their true purpose under banners of high-sounding abstractions and ideals. They make war to capture markets by murder; raw materials by rape. They find it cheaper to steal than to exchange; easier to butcher than to buy. This is the secret of war. This is the secret of all wars. Profit. Business. Profit. Blood money.

Behind all stands that terrible, implacable God of Business and Blood, whose name is Profit. Money, like an insatiable Moloch, demands its interest, its return and will stop at nothing, not even the murder of millions, to satisfy its greed. Behind the army stand the militarists. Behind the militarists stand finance capital and the capitalist. Brothers in blood; companions in crime.

What do these enemies of the human race look like? Do they wear on their foreheads a sign so that they may be told, shunned and condemned as criminals? No. On the contrary. they are the respectable ones. They are honoured. They call themselves and are called, gentlemen. What a travesty on the name, Gentlemen! They are the pillars of the state, of the church, of society. They support private and public charity out of the excess of their wealth. they endow institutions. In their private lives they are kind and considerate. they obey the law, their law, the law of property. But there is one sign by which these gentle gunmen can be told. Threaten a reduction on the profit of their money and the beast in them awakes with a snarl. They become ruthless as savages, brutal as madmen, remorseless as executioners. Such men as these must perish if the human race is to continue. There can be no permanent peace in the world while they live. Such an organization of human society as permits them to exist must be abolished.

These men make the wounds.