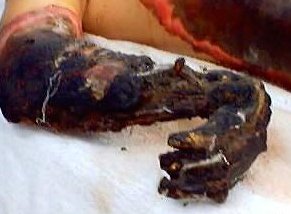 Never in human history have such genocide and cruelty been witnessed. Such a genocide was never seen in the time of the pharaohs nor of Hitler nor of Mussolini
~ Mehmet Elkatmi head of Turkish parliament’s human rights commission on Bush’s genocide in the Iraq war. 2004-11-28, originally reported in the Sunday Times of Australia, since withdrawn.

What does Elkatmi mean? He clearly does not mean Bush has already killed 6 million people as Hitler did. He is referring to the cruelty. Even Hitler refused to use poison gas. Hitler and Stalin only used a handful of tortures. Bush has concocted over 70. Bush is a torture and atrocity gourmet. Further, Bush’s systematic extinction of the Iraqi people apparently has no motive. It is violence for the sake of violence.

You may think to yourself, our boys could never do things like that. Watch this video

of US soldiers tormenting a crippled dog. The video of them shooting a dog has been pulled. People are more squeamish about killing dogs that killing Iraqi children.

While in Iraq we had a sport of killing dogs whenever the Iraqis weren’t shooting us. So when I shot this one at about 50 yards with my M4 and it ran yelping to lower ground, we had to finish it so my friends and I went to it and started shooting it. I’ve never seen a dog take as many shots to the head at least 4 as this one did and then after we thought it was dead we dug a hole and when I picked it up with the shovel it came back to life, so we shot it a couple more times…its pretty funny.
~ M. D. formerly of A TRP 1-10 CAV 4ID

The problem I had with choosing one source out of thousands of possibilities to illustrate each point is that you may have decided to discount anything from the source I selected. Before you dismiss these allegations, please do a google search yourself and see if you can find information from sources you do trust. You would expect as much from any citizen in Hitler’s Germany to investigate the allegations of atrocity, would you not, no matter how strenuously the state denied them or how outrageously barbaric they sounded.

The Pentagon shut down websites with news about the war. Your best bet for news is by passing it along in emails, or by searching Google for the lesser known sites.

In comparison the Iraqis have been perfect gentlemen with only two types of atrocity:

The atrocities of the Americans in Iraq and Afghanistan are nothing new. They are a direct consequence of imbalance of power. Americans overwhelm their victims in technology and wealth. That power necessarily corrupts. Humans, not just Americans, are hard wired to abuse excessive power over others. It took 500 years for the atrocities of the Spanish Conquistadors to become widely known. Spaniards, Nazis, Russians, Americans… like all humans, are deeply in denial of their own atrocities. They work hard to keep them hidden and to attack those who expose them.

The nationalist not only does not disapprove of atrocities committed by his own side, but he has a remarkable capacity for not even hearing about them.
~ George Orwell (1903-06-25 1950-01-21 age:46)