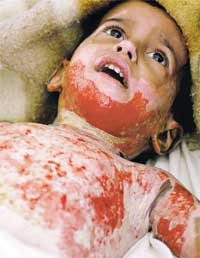 The images on this website are gut-wrenching. They show both the suffering of Americans and Iraqis. This horror is what American senators unanimously voted to continue. Even if you are an American with a weak stomach, it would be cowardly to avoid looking at what you voted for. If you can’t bear to look, skip the pictures and read the text and remember if you cannot bear to even look at the suffering, how dare you insist anyone else bear the reality of it.

I don’t claim to present all points of view here. You have already heard the American military, the Neocon, the Bush Administration and the FOX news version of reality ad nauseam. I don’t need to repeat them here. I am putting my efforts into presenting some other points of view which you won’t hear on American mass media that you may not have been exposed to before. As a fair judge, you need to hear from all sides in a conflict and neutral witnesses. Many Americans seem to think there is something unpatriotic about even listening to anything but the official party line.

The war stared officially on 2003-03-20 with the bombing of the residential districts of Baghdad. I watched this live on CNN (Cable News Network) as did many other Americans. Oddly these same people assert they are 100% certain American troops never attacked civilians during the war. On 2003-12-14 Saddam Hussein was captured. Saddam was hanged on 2006-12-30. Compat officiall ended on 2011-08-31. The war officially ended on 2011-12-15, though there were still troops in Iraq and, of course, all manner of private contractors were still occupying Iraq to guard the oil booty.

Modern warfare is designed to make battle safe for the technological soldier. It is war by remote control where the killer never even sees his victims. He presses a button and a bomb drops. He pulls a trigger to launch a rocket that demolishes a home. He squeezes a handgrip to release a wall of flaming napalm to roast everyone alive in a building. The necessary result is most victims are civilians. In a war on a third world country, such as Iraq or Afghanistan, where where half the population are under 15, a necessary result is also that most of the victims maimed or killed are children. Modern warfare is a cowardly and selfish enterprise. To reduce their risk, soldiers sacrifice the lives of innocent children.

If you’ve been sent into war with a B2 bomber strapped to your back and an array of high-tech sensors at your fingertips, you can kill Iraqis with no more thought or feeling than you might have wasting the Covenant on your X-Box at home.
~ Ran Prieur

For reasons they don’t explain, Google has blocked this page because it allegedly violates some German law. I can’t think what the problem could be. It seems more likely some right winger made a spurious complaint.