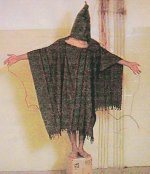 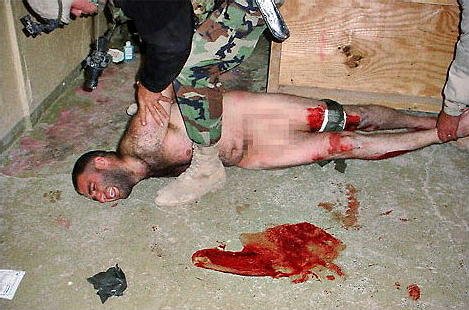 George W. Bush said the other day that the world should see his administration’s handling of the abuses at Abu Ghraib prison as a model of transparency and accountability. He said those responsible were being systematically punished, regardless of rank. It made for a nice Oval Office photo-op on a Friday morning. Unfortunately, none of it is true.
~ New York Times (1851 age:166), 2005-05-23

It is natural to want to disbelieve accounts of torture. It is sickening to discover the depths of cruelty your fellow man can sink to. Watch yourself playing the denial game as you read on. If you are like most people, you will find the least offensive torture, or the least solidly documented and seize on it, then discount it and then try to convince yourself all the horror has gone away. All you have done is sweep it under the carpet. You can’t stop the torture if you lie to yourself that it does not exist. It is real. There are even criminal convictions.

Diplomat Ann Wright argues the tortures concocted showed a deep understanding of Arab and Muslim culture. There is no way ordinary American soldiers came up with these on their own. They must have been taught them by their superiors who had access to experts.

Bush sent a directive in 2002-02 that the resistance in Afghanistan were to be treated as terrorists, unprotected by the Geneva conventions. This left the fighters and POWs (Prisoner Of Wars) open to any conceivable torture. 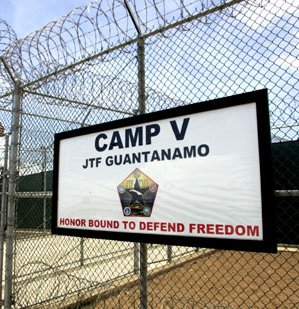 Sign at Guantánamo torture camp mockingly reads HONOR BOUND TO DEFEND FREEDOM, reminiscent of Hitler’s Arbeit Macht Frei he had painted over the gates to the Jewish concentration camps.

At Guantánamo and Abu Ghraib here is a partial list of the sexual abuse and torture:

Guantánamo and Abu Ghraib were not the work of isolated deviants. All this torture was exquisitely planned ahead of time by the Bush administration. Bush and Rumsfeld spent far more time plotting the torture than they did the invasion. Think about that. Torture is something you do as a last resort. These guys relished it, slavering over it for months like kids eager for Christmas.

Nearly all the links above discuss more than one form of torture. Read the lot to get the big picture of what is going on. Here is a list of resources to find out more. 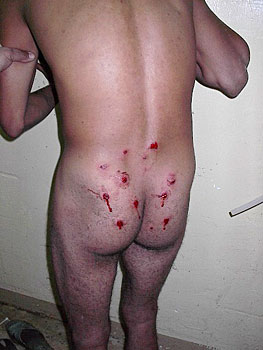 I think about over 20% of the people thus far that have been held to account as a result of the Abu Ghraib issue have been officers. I’m comfortable that we’re getting to the bottom of the situation. And I know we’re doing so in a transparent way.
~ George W. Bush (1946-07-06 age:71), commenting on the fact finding of probable cause to charge 27 officers and enlisted soldiers with offences ranging from dereliction of duty to maiming and involuntary manslaughter in the Dilawar torture case and charges recommended against 15 of them for the Habibullah torture case.

Charged with torture at Abu Ghraib are Lynndie England

. Like many other US soldiers, Graner is a psychopath who used to send pictures of his bloodied torture victims home to his children. Lynndie England pleaded guilty at her trial on 2005-05-04, but the military judge threw out the guilty plea saying she did not know what she was doing. On 2008-09-25 she was sentenced to 3 years in jail. She could have got up to 11 years. Her married boyfriend, Charles Graner was sentenced to 10 in prison

Like a Nazi, Grainer whined that he was just following orders and blamed everyone but himself.

was convicted of taking sadistic photos.

: has been charged with conspiracy to maltreat detainees, dereliction of duty for failing to protect detainees from abuse, maltreatment of detainees, rendering false official statements and assault.

was convicted on 2005-05-16 of 6 of 7 counts of prisoner abuse at Abu Ghraib. She was the photographer of some of the most famous Abu Ghraib abuse pictures.

The CBC (Canadian Broadcasting Corporation) prepared a timeline. Remember the faces. Make sure if you ever run into these sadists after they get out of prison to make their lives highly inconvenient.

The surprise is, they look like ordinary nice people. The men who ordered them to do the atrocities got medals. The ACLU is suing Donald Rumsfeld for his part is ordering the Abu Ghraib tortures : details. It seems every week they subpoena another government document confessing more torture. The US Navy was so horrified at the interrogation techniques and Guantánamo, they considered refusing to have anything to do with the camp.

The 2003-09-14 memo by Army Lt. Gen. Ricardo Sanchez clearly establishes that Gen. Sanchez authorized unlawful interrogation techniques for use in Iraq and in particular these techniques violate the Geneva Conventions and the Army’s own field manual governing interrogations. This puts a lie to Bush’s claim the tortures were the results of a few renegades. In a rape case, normally you interview both the accused and the victims. Americans seem to think the Iraqis have no right to be heard.

gave her excuses for the abominations. She has fingered General Geoffrey D. Miller

The torture was not just a few bad apples. It goes right to the top. Both Human Rights Watch and Amnesty International USA say there is prima facie evidence against Rumsfeld for war crimes and torture. And Amnesty International USA says there is also prima facie evidence against Bush for war crimes and torture.

These so-called ill-treatments and this torturing in concentration camps, stories of which were spread everywhere among the people and later by the prisoners that were liberated by the occupying armies, were not, as assumed, inflicted methodically, but were excesses committed by individual leaders, subleaders and men who laid violent hands on internees.
~ Rudolf Höss (1900-11-25 1947-04-16 age:46), not to be confused with Rudolph Hess,

For a while Bush denied this was happening.

The Iraqi people are now free. And they do not have to worry about the secret police coming after them in the middle of the night and they don’t have to worry about their husbands and brothers being taken off and shot, or their wives being taken to rape rooms. Those days are over.
~ L. Paul Bremer III (1941-09-30 age:76) Administrator, [Iraq] Coalition Provisional Authority, 2003-09-02

The truth was, now, not only wives were taken, but children. Bush used the Saddam’s own instruments of torture in Saddam’s own dungeons and Bush built many more.

There is a natural reluctance to believe anyone could commit deeds as foul as these, but recall, in every war when the historians picked through the data, they invariably find what really happened was even worse than what was reported during the war. During a war, a country works very hard to excuse, deny and disguise its own wrongdoing least the public lose stomach for the war.

The usual excuse given for torturing is that it is the only way to get crucial information out of terrorists, such as the location of a nuclear attack. This is nonsense. When people are tortured they will say anything they think might stop the torment. They will confess to any preposterous, depraved crime or conspiracy. They will pretend to knowledge they don’t have. Torture is ineffective for getting high quality information. Professional interrogators say you get much better results by developing rapport. If the Americans were serious about getting good information, they would use polygraphs (or better still PET scans which nobody knows how to defeat). So then why torture?
British Soldiers Torturing Iraqis
feedback section: still more pictures embedded