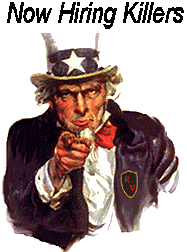 Accelerate your life!
~ Navy recruiting slogan . This is refreshingly honest — effectively, Get your life over with faster.

Here are 45 reasons I think you should not enlist in the US military and join the Iraq/Afghan or any other illegal war. Granted, I repeat myself in the list, but a point that can save your life bears repeating.

You might think I am crazy to write this essay. If I dislike sadists so much, shouldn’t I urge them to enlist, get their heads blown off and exit the gene pool? I have no beef with sadists, so long as they confine themselves to consenting adult partners. It is only when they act out on innocent people I feel compelled to dissuade or block them. I’m hoping, with my essay, I will convince a few young men and women not to enlist. That will reduce suffering for them, for the people they would have killed, maimed or tortured and for their families they would have abandoned.

Where is it written in the Constitution, in what article or section is it contained, that you may take children from their parents and parents from their children and compel them to fight the battles of any war in which the folly and wickedness of the government may engage itself? Under what concealment has this power lain hidden, which now for the first time comes forth, with a tremendous and baleful aspect, to trample down and destroy the dearest right of personal liberty? Who will show me any Constitutional injunction which makes it the duty of the American people to surrender everything valuable in life and even life, itself, whenever the purposes of an ambitious and mischievous government may require it?… A free government with an uncontrolled power of military conscription is the most ridiculous and abominable contradiction and nonsense that ever entered into the heads of men.
~ Daniel Webster (1782 1852 age:70), US Senator, Speech in the House of Representatives, 1814-01-14

Most likely you will pay no attention to me and you will sign up anyway. Think of me when you are sitting in Iraq with one eye blasted out like a smashed boiled egg, one leg missing and your penis dangling by a thread of skin. Think of me in the mental hospital when you are afraid to sleep because the nightmares of the kids you slaughtered come to haunt you. Think of me when you are on your death bed, wondering how you will explain to your maker why you killed all those people. Remember that I told you so. That is your natural punishment for being such a smartass, sadistic little brat.

In my youth I did that [killed people] for money and rather enjoyed it. The adrenalin rush, the gamble of life, youngsters tend to bit playfull with life.
~ Jim E , serial murderer, 2005-04-19 in alt.politics.bush, believed living in Seattle, on why he enlisted in the 101Abn.

If you decide to enlist anyway, please ask your Mom to drop me a line when you are killed or rendered a vegetable. I want to celebrate one more sadistic asshole leaving the gene pool.

Let Jesse Macbeth, Ranger vet who served in Iraq tell you what it is like. We would interrogate a family. We’d ask the man of the family a question; if we didn’t like his answer, we’d shoot his youngest kid. The military blog sites claim this tape is phony.

Americans are furious with me when I point out that aggressive war (attacking first unprovoked) is a capital war crime, in particular the unprovoked invasions of Afghanistan and Iraq. They respond But what about 2001-09-11? Even President Bush said that bin Laden and his Saudi Al Qaeda henchmen, were responsible, not Afghans or Iraqis. On 2003-09-17, Bush and his administration explicitly stated Iraq had nothing to do with 2001-09-11. Attacking Iraq is like attacking the USA for something Colombian criminals allegedly did, on the grounds both nations are nominally Christian. Americans have justified their carnage with a racist belief that the only good Muslim is a dead Muslim, blaming a billion people for the 2001-09-11 crimes of a handful.
~ Roedy (1948-02-04 age:70)

When there are no wars, soldiers do exercises to prepare for rescue from earthquake, flood and other natural disasters. This is a challenging work and completely admirable. The objections I stated above would not apply.