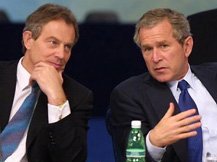 I am gay myself and was one of the early pioneers in gay lib in Western Canada, so I don’t fault Bush for being gay. Further, I don’t fault Bush for being into S&M. There is no shame in either sexual preference were it not for six things: If you are gay, you have to refine your gaydar to guess who is gay and who is not. If you ever make a mistake you could get a punch in the mouth or worse. The signals we gays look for are very subtle. Bush is broadcasting at 100,000 watts. If this were evidence about anyone but the president, the following evidence would be sufficient to be 1000% convincing he was gay, at least to any gay person. If you doubt me, present just some of this evidence to a gay person without telling them it is the president you are talking about and ask them what the odds are that person is gay. So that’s my evidence that Bush enjoys kinky S&M (sadomasochisic) and gay (homosexual) sex. Let me make it clear, Bush is not strictly gay. There is plenty of evidence that prior to his marriage he was heterosexually promiscuous as well, at least while drunk. The above is only evidence he is a bisexual sadist. 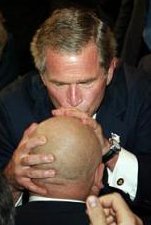 The goals for this country are peace in the world. And the goals for this country are a compassionate American for every single citizen. That compassion is found in the hearts and souls of the American citizens.
~ George W. Bush (1946-07-06 age:71)
Source: Federal Document Clearing House, President Visits D.C. Food Bank, 2002-12-19, a chicken in every pot, a slave for every citizen.
at the McKinley Society, a conservative think tank, 2003-02-28 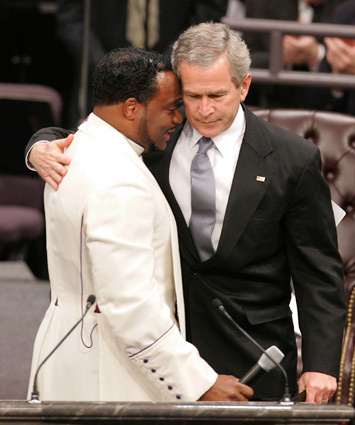 Bush and evangelist Eddie Long try to decide who will lead.

Bush Is Not Gay