Why Is Bush Such a Dufus? 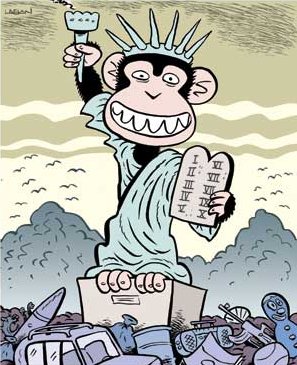 George W. Bush has great trouble mastering even a simple sentence. He is, day by day, becoming more and more incoherent, delusional and, well, unpresidential. That is diplomatic speak for Looney Tunes. Why?

There is evidence for all twenty-sex of these explanations.

We joke about Bush, but his gross incompetence is extremely dangerous. He has the power to kill us all by triggering nuclear war. Everyone laughs at him, yet almost everyone is afraid to tell him that his performance and behaviour is just not acceptable and demand that he resign for the good of the country and enroll in an appropriate Twelve Step Program modelled on AA (Alcoholics Anonymous). The cabinet and the country must stop acting as enablers to George W. Bush’s addictive behaviour whether it be substance abuse or addiction to power. He is way over his depth. He is like Mickey Mouse in The Sorcerer’s Apprentice.

Ironically, if someone showed up to work and started spouting incoherent word salads like Bush does, he would be fired on the spot for intoxication. Even garbage men in America must submit to surprise drug urine tests. For safety, the president and his cabinet should get blood and urine tests daily, done by several different labs, especially considering George W. Bush’s bizarre behaviour and Don Rumsfeld’s sudden personality change.

Rumsfeld’s transformation is really is striking. Rumsfeld used to be a stuffed shirt squared. Read his collected quotations.