The Dylexia of George W. Bush 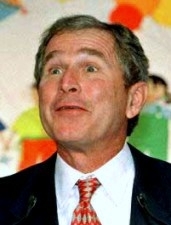 Texas: the great sstate of Taxessess

regime: region (perhaps Bush’s speechwriter did not tell him what that big word meant, so he read it as a word he did know.)

Free societies are hopeful societies. And free societies will be allies against these hateful few who have no conscience, who kill at the whim of a hat. Free nations don’t develop weapons of mass destruction.
~ George W. Bush (1946-07-06 age:71), 2004-09-17, 2004 Washington, D.C., explaining why he avoids hateful hats. He presumably includes India, USA, Britain and France in his list of not-free nations.

I don’t want nations feeling like that they can bully ourselves and our allies. I want to have a ballistic defense system so that we can make the world more peaceful, and at the same time I want to reduce our own nukyular capacities to the level commiserate with keeping the peace.
~ George W. Bush (1946-07-06 age:71), 2000-10-23

There was a good news story in Mississippi. I went down there and — it wasn’t because of me, it was because the doctors and the citizens understand the cost of a trial system gone array and they got themselves a law.
~ George W. Bush (1946-07-06 age:71)
Source: Federal Document Clearing House, President Calls for Medical Liability Reform, 2003-01-16
He meant awry.

Corporate malfeance has had an effect on our economy and we need to do something about it.
~ George W. Bush (1946-07-06 age:71)
Source: FDCH Political Transcripts, George W. Bush Participates in Rally at Oakland County Airport, 2002-10-14