Gannongate
A scandal involving pornographer, prostitute and pimp Jeff Gannon, aka Jim Dale Guckert. On his various websites he advertised his prostitution services of top sex, military abuse and urination humiliation for  an hour or /weekend. He included various nude and erect photos of himself and many urination shorts. He has since taken down most of this material, though some has been captured for posterity. In addition, nearly all news stories about the scandal have been similarly withdrawn. A White House insider gave Gannon access to the president’s press briefings under an assumed name, with fake credentials and no backing new agency. Gannon would lob softball questions at the president. Gannon has no journalistic experience. He concocted his writing and question by cut and paste of materials given to him by other Republican propagandists. Gannon had the run of the White House, visiting 196 times, often when there were no press conferences, often failing to sign in or out. He even stayed the night on many occasions. He was also invited to the 2003 and 2004 White House Christmas party, a perk reserved for the inner circle. Gannon wrote anti-gay and right-wing propaganda for a website. He owns or owned the following websites:

When Jeff Gannon says he is a top, he means that he is willing to screw clients, namely will poke his erect penis into the client’s lubricated anus, and push it in and out until he, Jeff comes. Mr. Gannon did not mention the keyword safe in any of his advertisements. This implies he is willing to do this without a condom for an extra fee. Barebacking (no-condom screwing) is highly dangerous for both parties for passing HIV (Human Immuno-deficiency Virus) back and forth. This implies Mr. Gannon must already be HIV+ (Human Immuno-deficiency Virus Positive (infected)), or he would never offer such a service.

As a top, Mr. Gannon would also be willing accept blow jobs from clients, namely to sit back and let the client put Gannon’s penis into his mouth and suck until Mr. Gannon had an orgasm. This would usually be done without a condom, but at the client’s discretion they could use one. There is little HIV risk to Mr. Gannon from not using a condom, but a small risk to the client if he had cuts in his throat.

Mr. Gannon also offers water sports. When he offers a golden shower this means he will direct a stream of his urine from his penis onto the naked body of the client. So long as the urine is directed to intact skin, this poses little risk for HIV. As a humiliation or submission ritual, the client might drink Mr. Gannon’s urine, optionally, directly from Mr. Gannon’s penis. Again this has relative low HIV risk, so long as the client has no cuts in his throat.

Mr. Gannon offers military style abuse, though it turns out he was lying about being an ex-Marine. That typically includes grossly obscene insults, paddling, whipping, tit clamps, ball clamps, demanding the client perform various degrading/painful tasks, like licking Mr. Gannon’s feces-covered anus or wearing a dog collar and chain, or other even grosser acts designed to show abject humiliation, submission and degradation. Gannon bragged he was able to perform his dominator rôle s without creating permanent marks, just temporary pain.

Who Let Him In?

Both press secretaries Ari Fleischer and Scott McClellan had to have been in on it since they are in charge of deciding who gets in. However, Gannon is also implicated in the Plame affair. Via Gannon and Novak, Republicans outed CIA (Central Intelligence Agency) operative Valerie Plame in order to punish her husband, Joseph Wilson, for pointing out the Nigerian Uranium forgeries that Bush used to sell the Iraq war. That connection suggests the sugar bear who let Gannon in was Karl Rove, according to an article posted on Truthseeker.co.uk. Of course, speculation is abuzz that Gannon had sex with or pimped for various members of the White House including George W. Bush himself. R. Gregory Stevens was in charge of entertainment in the White House. He was found dead, at age 42 of unknown causes in a guest room at Carrie (Princess Leia) Fisher’s house. details.

Bush passed Gannon on to Tony Blair the Prime Minister of England for some private entertainment That makes Bush a pimp too. 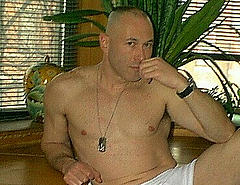 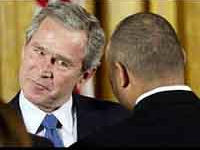 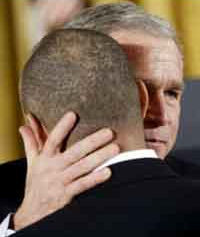 Gannon was on a first name basis with the people in the White House and they leaked important information to him ahead of other reporters.

. Straight men don’t go around feeling up the heads of strangers, unless they are barbers.

It appears Gannon got the press pass for plausible deniability to cover when Gannon was caught with prominent politicians. It gave a fig leaf for hanging out with a male prostitute. Gannon made more than two dozen excursions to the White House when there were no scheduled briefings. On at least fourteen occasions, Secret Service records show either the entry or exit time missing. This both shows lax security for Gannon, showing he was treated as a special case and an attempt to disguise the length of the visit. Sometimes he would stay as long a six hours or overnight. Further, there were at least 5 times Gannon attended a press briefing and is on video doing so, where he neither checked in or out.

Bush’s friends who own the US TV and print media have kept the story under wraps, with the exception of the 2005-06 issue of Vanity Fair.

The following people have demanded an investigation:

Gannon has tried to claim his activities are his private sex life and hence nobody’s business. Not so. Gannon is a prostitute and advertises his services. That is his business, not his private sex life. Further, if Bush paid Gannon for sex or offered him something of value in return for his sexual services, both Bush and Gannon are guilty of a felony.

You might compare George W. Bush and Jeff Gannon with Bill Clinton and Monica Lewinski.