Bush Knew in Advance About 9/11

Anyone who has proclaimed violence his method inexorably must choose lying as his principle.
~ Aleksandr Isayevich Solzhenitsyn (1918-12-11 2008-08-03 age:89)

Even if you find it too hard to swallow that Bush was complicit in 2001-09-11, you can’t deny he knew it was coming. Bush claimed 2001-09-11 came out of the blue with no warning. Yet France, Germany, Russia all claim they sent him warnings. On 2001-09-11, no less, the CIA (Central Intelligence Agency) was running assimilation of a 2001-09-11-like event. How can Bush possibly claim it never occurred to anyone airliners could be used as missiles?

Here are just some of the warnings Bush got:

In her testimony before the 2001-09-11 commission, Condoleezza Rice backpedaled and now admits Bush did know such an attack was coming, but he did not know the precise details of when and where.

Bush has been caught lying time and time again and still people give him the benefit of the doubt. That is irrational.

The Bush supporters like to portray anyone who refuses to believe the Bush version of what happened on 2001-09-11 as a crank wearing a tin foil hat. If that is true, over 50% of Americans now wear tin foil hats. 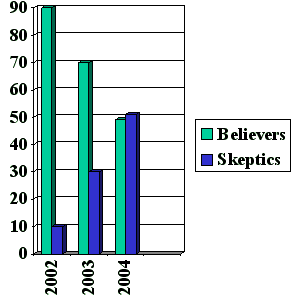