Keyboards come in two main types, clicky/stiff touch and silent/soft touch. You have to try both to see which you prefer. If you don’t already touch type QWERTY, you might want to consider learning the modern DSK layout instead. That article also talks about the ergonomic Kinesis keyboards. Computers usually come with very low quality keyboards. Spending even $10 extra on the keyboard will greatly enhance your enjoyment. Keys that stick down or keys that don’t register when you hit them can drive you nuts.

Microsoft brand keyboards come with an extra key, decorated with a Windows logo, called the Windows Key. If your keyboard does not have one, you can hit Ctrl+Esc instead.

Black or grey keyboards have the practical advantage of hiding grime. You still have to clean them to get rid of grit and hair that will interfere with the key action.

Ideally every key should have a slightly different shape so your fingers can subliminally tell if they are hitting the correct key. I have conjectured that putting Braille on the keycaps would increase accuracy. At the very least the two home keys should have some sort of distinct shape, a raised dot or bar, or a depression so you can tell when your fingers are properly positioned over home row.

Laptop keyboards are fragile, have poor feel and are cramped. I think the designers should drop the numeric keypad to reduce the number of keys across and add an extra row of rarely used keys across the top, or use a layout such as the Kinesis. There is plenty of room vertically for extra keys. One way to get around the quality problem is to use a lightweight aux keyboard you plug into a USB (Universal Serial Bus) port.

Replacement keyboards cost from  to  Canadian. If the one you are using offends you, throw it out and get another.

I don’t know how they do it, but the Chinese manufacture keyboards for the major companies for $5 each. 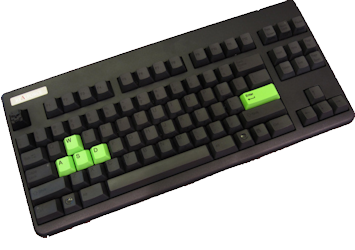 This is the Rolls Royce of keyboards. It uses Topre silent mechanical switches, with variable weighting: 30g, 45g and the Esc key is 55g. They come in many layout variations and key colours. It is hard to find sources. It has only 60 keys compared with the usual 101.

How big should a keyboard be?

There are both corded and wireless keyboards:

The corded versions are more reliable and easy to set up. They do not need batteries. They usually have more lights since the lights are powered by the computer, not by batteries. Corded versions work during boot up.

Ideally you don’t want a numeric keypad. Without the keypad the keyboard is considerably narrower. The means you don’t have to stretch to reach the mouse. This saves shoulder strain. Most people never use the numeric keypad. You can buy a detachable keypad you can move out the way when you are not using it. Such narrow keyboards are hard to find at retail outlets.

The ErgoDox EZ is an IndieGogo crowd sourced fully assembled very compact keyboard costing . It comes in two independently positionable pieces. You can program the function of every key independently. Does not support macros. Uses Cherry MX mechanical switches (blue, black, clear or red). The keycaps come without labels. It is somewhat like the Kinesis, but all keys are on the same plane, not mounted in dishes. It is based on the open source ErgoDox design that comes as a kit. It can be arranged as a tent.

The IBM (International Business Machines) spacesaver model gets rid the numeric keypad with most people never use, thus making the keyboard more compact. The original IBM AT 83-key keyboards with the function keys on the left, were more compact, but are now collectors items and command high prices as do most of the older keyboards. The Unicomp spacesaver retains the numeric keypad. IBM then later, Lenovo made the Spacesaver II Trackpoint with 88 keys. These are sometimes called IBM SpaceSaver keyboards. They have a nice compact layout, but not the clicky touch of the true IBMs (International Business Machineses). They are usually black with a little red knob between the G and H keys. Compaq also makes a keyboard they call the SpaceSaver, but it has a quite large footprint with a full numeric keypad.

Usually compact keyboards are wireless. To make them work, you must insert a tiny receiver into one of your USB ports. These things have quite a range. If there are other computers in the same vicinity, what you type may also show upon their screens too. It you buy only Logitech Unifying Receiver products, it is possible to configure every mouse and keyboard in your home to different channels so they do not interfere. In general, some of the receivers work with some of your wireless devices. They all look alike and you accumulate a bagful of them over the years. The industry still has not got their act together on how to automatically avoid interference. Even with Logitech, it can be quite a production to configure. Also consider that using a wireless keyboard makes it easy for amateur spies to monitor everything you type including passwords. All it takes is a $10 device that looks like a charger plugged in nearby logging all your keystrokes. A high quality keyboard uses encryption to defeat this technology.

These compact keyboards are in ascending order by list price. This approximates the order of street price.

IBM Model M keyboards are in a class by themselves. They use a mechanical flapper plate for deep stroke, loud click and shock absorbers for your fingers. If you like your keyboards to fight back with strong resistance, more like a manual typewriter, you will like these. They are heavy, about 3.18 kg (7 lbs). Don’t ever take a buckling spring keyboard apart, other than to pop the keycaps for cleaning. You will never get it back together again. If you key in a room with other people, they might not like the clatter. I find it useful feedback. They were manufactured by IBM, later Lexmark and later Unicomp.

Most modern keyboards have a USB connector. Older keyboards use a small round PS/2 6-pin mini-DIN connector. Even older ones use a large round 5-pin DIN (Deutsches Institut für Normung/German Institute for Standardisation) connector. Before you buy, factor in the cost of the various converters you may need. Make sure the converters are designed to provide extra power to the older style keyboards.

The key to IBM ’s feel, is a mechanical buckling spring. When you press the key, the spring buckles, flipping a plate closer to the base. This changes the capacity of a capacitor embedded in the base. The change is electrically detected. There are no actual contacts to corrode.

Gaming keyboard such as the Razer Tarantula have a number of features that can be useful to non-gamers as well.

If I were to design a keyboard from scratch, here are the principles I would employ:

If people complain your typing is too loud there are three approaches to mollifying them:

The catch is, the quieter the keyboard, the crummier the feel.

Especially if you learned to type on an old manual Underwood typewriter, most of the noise of your typing comes not from the keyboard, but from your fingers slapping the keys. Practice stroking the keys as lightly as possible and still have them trigger. Modern keyboards need much less pressure to get them to trigger reliably than the early computer keyboards.

I have seen a device advertised on the net that is essentially a plastic bag. You put your keyboard in it. I doubt it would make much difference to the sound. It would have to interfere with your typing.

The Kinesis people are working on a new keyboard that you can program (layouts and macros) via the USB port.

The Kickstarter Das Keyboard 5Q project lets you modify the colours the the key legends over the Internet. It uses Omron (not Cherry) mechanical switches. You might use the colours to monitor status of a set of servers or alarm conditions. You could use the colours to warn you of incoming email from various people. The project works out of Texas, not Germany.