In this document I will introduce you to some of the alternative keyboards to the standard QWERTY. I have split off Maltron, DSK and Kinesis into separate documents.

Here are some layouts from standards and actual keyboards:

The ANSI DSK (Dvorak Standard Keyboard) standard is the most wishy washy document I ever read. It allows almost anything to call itself standard. However, reading between the lines, this is what I think they really intended to be the standard. They watered it down so as not to offend any manufacturer.

If they published a true standard, then manufacturers might have to retool to conform and then you could move from keyboard to keyboard and type just as fast as you did on your keyboard back home. Heaven forbid that should happen! The companion QWERTY standard is just as bad.

This layout moves the left shift key back the position God intended for it. The keycap for it cannot be moved however.

This layout has two left shift keys. Some software distinguishes between the two kinds of minus key and thus this layout will not work since the numeric minus was sacrificed to give you a second left shift key.

This layout moves the left shift key back the position God intended for it. The keycap for it cannot be moved however.

This layout moves the function keys to the left. It has a large enter and shift key, though the backspace key is small.

You can configure this further, swapping Ctrl and CapsLock, \ and *. This layout has a huge backspace and enter key. This keyboard also has function keys down the left and across the top.

The configuration keys work like this: All switches should be off except:
5 — swap CapsLock, Ctrl, Alt
6 — swap asterisk and backslash
7 — Dvorak Layout-1
7,8 — Dvorak Layout-2

This layout further optimizes the punctuation, placing the common parentheses, ! and @ near the centre. You can configure this further, swapping Ctrl and CapsLock, \ and *. This layout has a huge backspace and enter key. It has function keys on the left and along the top.

This layout is for people who are missing a right hand, or who otherwise have the right hand occupied as they type. This layout has a huge backspace and enter key.

This layout is for people who are missing a left hand, or who otherwise have the left hand occupied as they type. (Those skilled with this layout may improve their popularity in sex chat rooms.) You can configure this further, swapping Ctrl and CapsLock, \ and *. This layout has a huge backspace and enter key. It has function keys on the left and along the top.

Geneva has a damaged right pinkie. This is the modified Dvorak layout she came up with to compensate. 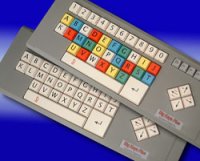 This keyboard is designed for children or people with motor control problems. It has big one inch square keys and comes in either QWERTY or ABC alphabetical layout. You can get them from ErgoCanada.com.

Håkon Hallingstad devised the Arensito keyboard. It gets its name because ARENSITO are the most commonly used letters in English. These letters are given prime keyboard real estate. analysis of key frequency.

The home row is one higher than traditional.

The frequency of use goes roughly like this: etaonhisrdlucmwgfypbkvjzxq. The Dvorak home row in contrast, is aoeui dhtns.

Dvorak did his work with mechanical and electromechanical typewriters. To avoid jamming, you need a rock steady rhythm. The last thing you want are two keys next to each other rolled quickly. In contrast, the Arensito keyboard attempts to put commonly used pairs of letters side by side so that you can quickly roll them. Further, to rapidly key a pair you must coordinate both sides of your brain, leading to transposition errors. You don’t have that problem when they are done with the same hand.

I was puzzled over the Arensito placement of the infrequently used g and b in such prime real estate and the demotion of c and h to the awkward bottom row. Hallingstad explained that he found it easier to bend the finger than to move it sideways, especially on Kinesis and Maltron keyboards. He placed keys surrounding the e so that common pairs involving e could be keyed easily with a rolling motion.

This keyboard does not have hardware DSK ability, but it has some interesting features. First the two halves of the keyboard can be adjusted to any angle from about 20 degrees to almost vertical. Next it has adjustable wrist rests which help guide your hands to home position. Third it has re placable rubber keydomes. If you like a lighter or springier touch, you can get keydome kits to change the feel. Finally, it puts the function keys back on the left where they can be easily hit.

Unfortunately, this keyboard is no longer sold. I cannot even find it used. My room mate wants one or at least the wrist-rest from one.

The Fitaly keyboard (named for its F I T A L Y top row) is optimised for one finger or pen keying. It is an on-screen software keyboard designed for use with various PDAs (Personal Digital Assistants). 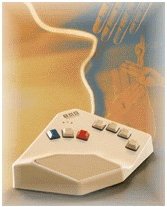 The BAT keyboard by Infogrip is an unusual keyboard, primarily designed for people who either have no left hand or whose left hand is otherwise occupied. It is not a DSK keyboard; I mention it here because it is an option for the experimentally or ergonomically-minded sorts of people who would consider DSK. There is also a left-handed version. It has three keys for the thumb to press and only four for the fingers. You have to hit several keys simultaneously with magic chord patterns you memorise to type the various letters and punctuation — sort of like the old comptometers. These are popular with people with various sorts of extreme wrist disability since your fingers don’t move. Most people achieve 30 to 50 WPM (Words Per Minute) 2.5 to 4 CPS (Characters Per Second). They also make a version with a built-in track ball at the bottom center.

This is as all black keyboard and I mean all black. The ultimate version does not even have any legends on the keys, though the professional version does. Not having legends forces you to touch type, all the keys. The touch is similar to an IBM Model M, but not quite as clicky. It uses Cherry gold-plated mechanical keyboard switches. It does not come with a DSK variant, though you could do that in software. 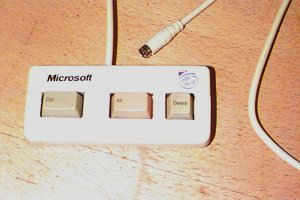 Microsoft has take the BAT idea one step further in reducing the keys to the most commonly used Ctrl, Alt and Del.

Esperanto uses accented letters c g h j s u, but there is no q, w, x or y in native Esperanto words. 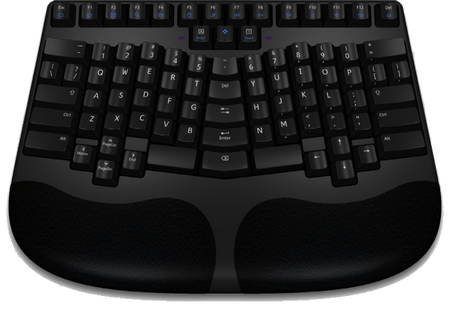 This keyboard costs about The Truly Ergonomic uses a conventional QWERTY layout. It is a compact layout that reduces finger stretching and stretching to use the mouse. It uses premium brown (silent no click) gold-plated Cherry switches. It comes in a number of variations, with and without the wrist rest, with and without legends, silent or lightly clicky. You must preorder and wait several months. They collect orders, then use the money to manufacture a batch of keyboards. It is programmable. You can logically rearrange the keyboard layout in any way you please, though you cannot rearrange the keycaps since different rows have different shapes. That means you can have a DSK layout, but not DSK keycaps. The shift keys are placed one row higher than usual. What look like four tiny unmarked keys are not keys, just the keyboard surface between keys. The two long black keys are the space bars. Traditional keyboards have columns of keys hit with the same finger staggered. This makes no sense ergonomically. The Kinesis and the TrulyErogonomic have non-staggered columns. The tradition comes from the requirements of old mechanical typewriters to stagger the mechanical arms from each row to fit in limited space. Although keycaps of the same size can be interchanged and are easily removable, it is only recommended to switch keycaps within a given row as different rows have different profile shapes. This means you can’t rearrange the keycaps to DSK, but you could have a programmed DSK keyboard with QWERTY legends. They are headquartered in Vancouver, BC Canada, where I grew up.

The French government hired a consulting firm Afnor to design a replacement keyboard for AZERTY. They came up with Bépo. It is a variant of DSK. Note how the vowels are on the left home row and the common consonants are on the right home row.

I know of no such smart keyboard, but here is how it would work. It has LCD (Liquid Crystal Display) keycaps to show you the layout. At the end of each week it analyses your typing speed on each key and your frequency of use of various keys and key pairs. It then redesigns an optimal layout for the next week. You keep working like this until you decide to freeze the evolutionary adaptive feature.

I know of no such smart keyboard as this: Every key has a backlit display that shows you what you will get if you hit that key now. So for example, when you hit the shift key, all the display change to display upper case letters. You can select from thousands of possible layouts, or switch to one you designed yourself. Let’s say you are doing a mixture of French and German. You could hit a single key to toggle between the two most recently used layouts. There is a display on the keyboard, about 3 cm (1.18 in) long, not on a particular key, that display which layout is currently in effect. There is also a mode where you can key any 8, 16 or 32-bit unicode in hex or decimal.

The keyboard does not necessarily have thousands of layouts in firmware. It may just cache some, and have them loaded as needed by the driver.