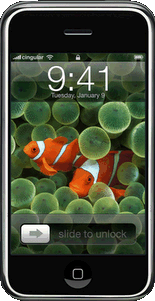 iPhone
Apple’s cellphone. What makes it different is that it has no buttons. The entire front surface is a colour touch-pad screen that senses the heat of your fingers. It runs the Macintosh OSX operating system. The apps are written in Objective-C. It uses GSM (Global System for Mobile Communications) or Cingular’s Edge digital data transmission system. It ties into WiFi (Wireless Fidelity) Ethernets and speaks bluetooth.

It will set you back in the order of  for the basic hardware and software. This is so ridiculously overpriced, it means the phone is primarily a status symbol, roughly half the cost of Rolex watch. The advantage of the watch is you don’t need to buy a new model every 6 months to avoid looking passé.

It has mapping software that lets you know about traffic density.

Unfortunately, though the phone is theoretically capable of functioning on other networks, Apple has chosen to artificially lock it into the A T & T network. You can buy unlocked models at extra cost.

The CPU (Central Processing Unit), its speed and the size of RAM (Random Access Memory) are closely guarded secrets. I have written Apple chastising them for being so close-mouthed. However, shortly after the iPhone went on sale, buyers discovered the iPhone is using an ARM1176JZF-based processor, probably the 667 MHz Samsung S3C6400. This chip sports an embedded Java acceleration engine called Jazelle. ARM processors traditionally support two instruction sets; ARM state, with 32-bit instructions and Thumb state which compresses the most commonly used instructions into 16-bit format. The Jazelle technology extends this concept by adding a third instruction set, Java bytecode, to the capability of the processor, together with a new Java state, so it looks as though Jobs has not closed off the possibility of Java in future. The big problem is Java is not gesture-based like the iPhone.

You need iTunes and a desktop PC (Personal Computer) to activate the cellphone setting up your air time billing account.

The iPhone does not support Java or Applets. If it happens, Steve Jobs has said it won’t come from Apple. However, it does have a proprietary Apple SDK (Software Development Kit). Apple forbids companies or individuals to write their own apps for the iPhone. This is probably the main reason it is not that big a threat to the BlackBerry.

Oracle has announced cellphone very similar to the iPhone informally called the jPhone. The official product name is Java Mobile FX It has 32 megabytes of RAM and a 200 megahertz ARM processor. There are also dozens of Chinese knockoffs.

The big change is wireless earbugs which allows the unit to to be somewhat whaterproof.

The iPhone 5 is deliberately incompatible with previous phones so you also have to buy new accessories. It has a slightly larger screen, but lower weight.

The iPhone 4 boasts a 960 × 640 Retinal display (the resolution used in DOS (Disk Operating System)). These phones are more expensive than laptops and have no hard disk, decent sized screen or touch keyboard.

Apple announced in an improved model at half the cost called the iPhone 3G. It uses the higher efficiency 3G cell phone networks. It has built-in true GPS (Global Positioning System), not just rough cellphone signal strength triangulation. Apple has also opened it up to third party applications, though only Apple-sanctioned ones. To use the phone in Europe, you need the extra cost GSM model.

Rogers in Canada are charging per month, giving 1/3 the minutes Americans get for the same money. Further, downloads are limited to 400 MB a month, where Americans get unlimited downloads. Canada has a near monopoly with only 3 cellphone providers. This situation may improve over the next few years bringing prices down.

Shopping for an iPhone