I am a big guy 6’2½”, with a bellowing, alarming voice, born 1948-02-04, with hair like Doc in Back To The Future, only brown. I have a clumsy lurching gate caused by neuropathy and back trouble. I feel embarrassed about my appearance and so usually avoid appearing in public.

marital status: attached but not married.

accent on the first syllable. This is a nickname derived from Munroe, my school days name.

nome de plume: Gaius. Gaius speaks for planet earth, through me as a channel and translator. Transcribing Gaius’s thoughts is much like playing charades. The name Gaius is rich with associations in the Pagan, Roman and Christian traditions.

I usually work on a fixed price for a contract. The price depends on how long I think it will take and how interesting I think the work will be, how useful I think the work will be to the planet and how busy I am. I am happiest to tackle small challenging problems, the parts of a project you can’t solve yourself. I ask for half the money up front and half on completion to your satisfaction. All bug fixes are included, no matter when they are discovered and get top priority. You can pay by PayPal to my email account, or by cheque. Sorry I no longer accept credit cards.

I also work on a hourly basis for consulting, brainstorming, coaching, trouble shooting etc. Again, there my rate is based on your ability to pay and how valuable the work is to the planet. I usually charge charities  per hour, individuals  per hour and businesses  per hour.

Planetary consciousness — think globally, act locally. Optimize globally. Plants and animals have just as much right to the planet as humans. Man is the caretaker of earth, not its master. We must reduce the number of humans without resorting to war, pestilence or violence.

My whole life, starting in childhood has been mainly about various causes: in roughly the chronological order they came to my attention:

Right now, global warming and ending the wars in Iraq and Afghanistan are at the top of my priority.

I love watching Takahiko Kozuka and Jeffrey Buttle skate. I find most figure skating too campy.

I started my first year at Malvern House, a British-style Christian boarding school in Victoria BC. That’s probably where I picked up my slight English accent and schizophrenic attitude toward religion. I attended elementary school in West Vancouver at Cedardale for grades 2 and 3 then later Westcott for grades 4 through 6. I attended Hillside secondary and later West Van High. I was always the first, second or third student in my class in all subjects except physical education. I started school a year early, then later went on an accelerated program, so I graduated from grade 12 two years early. I went to UBC (University of British Columbia) and studied honours chemistry and mathematics. I got a BSc in Math in 1968. I took all the courses for my Masters degree, but gradually lost interest in mathematics because it was so far removed from practical application and because I had an exploding interest in computers and gay lib. I never did write a thesis. I fantasize I will receive a posthumous honorary doctoral degree for some of my work such as Abundance, SCID (Source Code In Database), or quantum theory.

The -30- at the end of my posts is a newspaper convention meaning the end. If you have a listing, it confirms all was printed properly. In a modem transmission it confirms nothing was chopped off. I picked up the habit originally from newspaper editor friend of mine. I have heard many different explanations about how the convention got started: 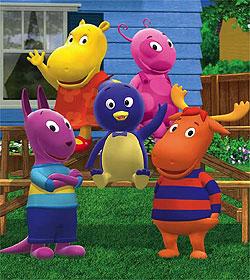 Oddly one of my favourite TV Shows is targeted at pre-schoolers. I still have a television, but I canceled HDTV (High Definition Television) cable service, disgusted with the overall quality of programming. It is called The Backyardigans. It is about five cartoon animals, Tyrone a laid-back moose, Austin a shy kangaroo, Pablo an excitable penguin, Uniqua a feminist pink spotted animal, and Tasha a slightly bossy yellow hippopotamus. They have adventures of imagination in their common backyard. Watching this show puts a huge smile on my face and a generates a gentle euphoria. Part of what pleases is that I thoroughly approve of this show to indoctrinate the young. Its characters are curious, kind, considerate, positive and supportive — excellent rôle models. Each episode highlights a different musical genre with amusing original singable songs, a song parody and some simple dances. The 3D animation is smooth and at times super real, e.g. moving water, or tiny horses, with plenty of loving detail. The actors who do the voices are reasonably accomplished child singers. This show does not patronise kids with silly, pretending-to-be-stupid, shrill adults masquerading as children.

I don’t talk much about my family and friends because of the death threats against them. I don’t want to make it easy for nutcases angry at me to hassle them. I am the eldest of five children. I have three younger sisters and a younger brother. I have relatives across Canada, in the USA and in New Zealand. My nephew is a local TV star. They are a very supportive bunch. Both my parents and all my grandparents are dead. Dad was in charge of all electric power generation in the province for many years. My Mom founded North America’s first food bank called the Free Food Stall. My dad’s father was the Surveyor General. If you got back far enough, there was a female ancestor with a major rôle in the French revolution, so I came by my rabble rousing honestly. My nephew is actor Torrance Coombs, (or Tory as I call him), who starred as Juniper/John Doe in JPod and as Thomas Culpeper in The Tutors, a British historical drama. He is in Ireland filming five episodes in 2009-06 through 2009-08.

It is not important that you agree, but that you think the issues on this website through for yourself. I’m often wrong and I’m eager to hear the correct answers.

I am Canadian, so I naturally use ou spellings like honour. People still mistake me as American, so I have affected some ise rather than ize British spellings as well to emphasise that I am not American.