EJB
EJB (Enterprise Java Beans). EJBs (Enterprise Java Beanses) are used mainly by large corporations. They are not something to concern the fledgling Java programmer. They are complicated. I can only give an arm waving overview that won’t enlighten much. You have to study them in detail before you even begin to understand what they are for. EJBs are probably the most difficult part of Java.

Here is a rule of thumb. If your application is so complicated that it will have to be distributed over several servers, have a look at EJB. If not, use a simpler technology.

The point of EJB is to fob much of the work of concurrency, transaction handling and persistence off on the container so the beans can concentrate on business logic.

There are several types of beans. This diagram outlines them: 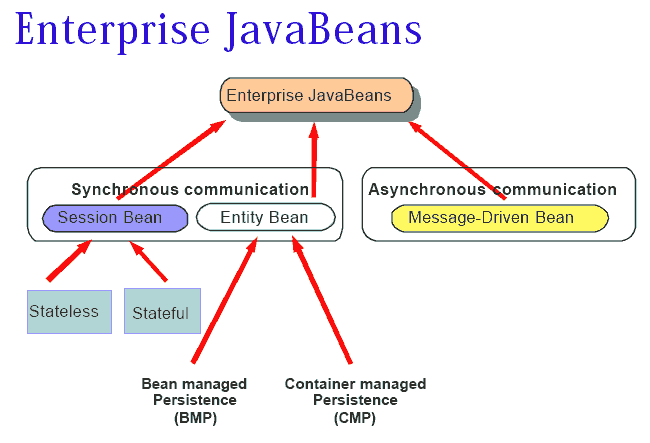 EJBs come in a number of flavors.

Using EJBs gives you a number of things. The biggest thing is the server environment. You do not need to implement all the things that go with a server, like threading, polling, security, etc.

Using EJBs also takes away a number of things. You are not allowed to do certain things within the EJB container, e. g., you should not create threads, do file IO, listen on a socket, etc.