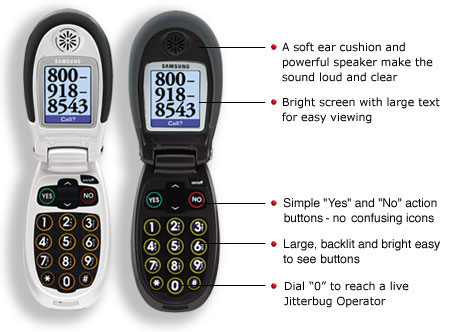 Cellphones in general suffer from featuritis. They are designed for young geeks who love gadgetry. They simply overwhelm ordinary folk who just want to make a call. My partner gave up on cellphones. She would hit the wrong button and needed me to get the thing back to ground state. The Fido Samsung model was the simplest we could find, but still had far too many confusing features for her. I have finally found a phone that is aimed at the technophobic person who just wants to make a phone call. It is called the Jitterbug made by Samsung. It has only a

button besides the digits and a large digit display. It even comes in an ultra simple version, the Jitterbug J, suitable for a child with only three buttons: The phone has a small display when the phone is closed and a bigger more detailed one when it is open.

One feature that appealed to me is that you can have a friend configure the phone contact list for via the web without access to the phone. This allows a nephew to help an aunt keep her contact list up to date. It has one very simple feature that should be standard on nearly all cellphones. When you close it, it automatically resets to ground state.

You buy either model of Jitterbug phone for , and you then buy access airtime prepaid minutes direct from Jitterbug. You don’t need to sign up with a local cellular carrier. You can pay as little as a month. You don’t sign a contract. Long distance to and roaming throughout the USA and Canada are free. I am not 100% sure you can roam around Canada and have these work connecting via Canadian cellphone carrier. I have a query in. Unfortunately, the Jitterbug service is not available for sale outside the USA. Your phone won’t work in Europe.

The JitterBug phone itself is manufactured by Samsung, so in theory any carrier could support it. They would need to provide the operator and directory assistance services to fully emululate what Jitterbug does. From time to time, I jitter at Canadian carriers to support it, but so far so success.