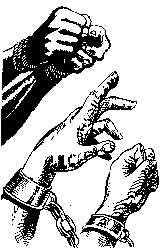 The man who composed Amazing Grace was a slave trader for many years. During those years it never occurred to him that he was doing anything immoral. He was just earning a living. We find it surprising he did not notice how much suffering he was causing. It was only after he retired did it dawn on him the horror of what he had done. Yet today we blindly do that exact same thing, mistreating domestic animals. We tell ourselves that the suffering does not count because it is not human suffering.

Domestic chickens are confined seven to pen. The pens are so crowded, the chickens cannot even lift their wings. Sometimes we cut their beaks off. They never see the sky even once in their lives. Sometimes we wire their feet to the bottom of the cages to stop them from moving and wasting precious calories. We kill them by scalding them to death. Sometimes chickens emerge from the scalders still alive. Particularly egregious is the treatment of chickens destined for KFC (Kentucky Fried Chicken)

We keep young cows penned so they can’t move. This makes the meat more tender. We deny them water so that they will eat the maximal feed. They never once see the sky in their entire lives.

Dolphins are more intelligent than us, though we treat them as nuisances. We fish for tuna with nets that entrap and drown millions of dolphins every year. We cynically stomp dolphin friendly on some of the tins of tuna, though they are caught in identically the same way.

Whales are more intelligent than us, though we treat them as food animals. We kill them with harpoons.

There are about 10,000 Indian elephants left in the world, 3000 of them in captivity. The forests that the elephants used to browse have all been converted to tea plantations. They are headed rapidly for extinction, squeezed out by India’s teeming billion humans. The villagers shoot the elephants if they come to steal their crops, when in a broader sense it is the villagers who have stolen the elephant grazing lands. Indians also still capture wild elephants and tame them, much as Americans captured and tamed negroes for slave labour.

Man has gradually commandeered nearly all arable land for food crops. Originally these lands supported thousands of others species besides man. They don’t recognise man’s exclusive right to those lands. We refer to all those animal species as pests from insects to rodents to elephants.

We poison, gas, trap and kill them with zero regard to how much suffering we inflict. It does not matter because these animals are pests stealing our food. They deserve suffering. Technology such as sterilising male screw flies exist that effectively and humanely reduce pest populations, but we prefer to use ones that cause maximal suffering, taking revenge I guess.

If we treated humans this way (caging, restraining, scalding, drowning and harpooning) we would consider this treatment sadistic and inhumane. Surely animals suffer just as much as humans even if they cannot articulate their complaints. We are as deliberately blind to that suffering as our forefathers were to the suffering they inflicted on slaves. I suppose it is a bit much to expect people to treat domestic animals well when they ignore even the pleas of fellow humans living in other countries. It is a long slow evolution to becoming a compassionate species.

We use the same blather that our forefathers used to justify mistreating slaves. Slaves have no souls, therefore they cannot feel pain, they just appear to feel it. Slaves are not intelligent like us. We are more important than slaves. It is only fitting to sacrifice the welfare of a slave for the well being of a human. Slaves have no rights in the law, so it is preposterous to talk of the rights of slaves. Slaves are chattels. It is nobody’s business what you do with your own property.

Some of the same rhetoric used to justify the persecution of native peoples pervades the justification for the torture and exploitation of animals and expropriating their habitats. Heathens don’t have souls. They are just savages, not civilised like us. They are inferior in intelligence. The only good Injun is a dead Injun.

It is only a matter of time until we recognise the right of all species to coexist with man, unmolested.

I eat only free range eggs. This is probably still nowhere near ideal, but at least I vote with my money that factory egg producing completely unacceptable. I don’t eat veal at all. I have not seen the equivalent free range beef and pork, so I eat it rarely.

At some point more direct action may seem appropriate, freeing slaves, smashing slaving equipment and harming slavers, but for now I am almost as caught as my fellows in the trance of feeling foolish about my squeamishness over sadism to animals.

People put up with these horrible practices because they buy on price alone. Perhaps if such products were labeled with pictures of the suffering used to produce them, people would be more willing to pay a little more for humane food production. Perhaps one could insert pictures inside the egg cartons to wake people up.

Doctors have discovered you can all but eliminate the danger of heart attacks and stroke by dropping meat, chicken, fish, milk and cheese from your diet. This is a pretty drastic change for most people. However, even a 25% cut is your consumption of these foods will give you significantly better odds of beating a heart attack. Even a famous fast-food addict like President Clinton was able to cut his consumption to one quarter-sized piece of turkey every two years. He reported a massive boost in energy, which is his main motivation now, rather than fear of heart attack.

Even before it became economically viable to stop slavery, people started pushing for it on moral grounds. Surely that time has come now. The marginal costs of humane livestock treatment is easily borne by society. There is no need for the ever increasing sadism that goes on to shave prices.