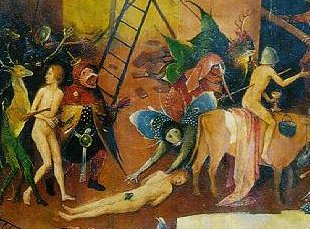 There cannot possibly be a god in heaven watching all of this calmly.
~ Revi Shankar

Traditional morality is based on a religious myth that there is some after death punishment if you behave badly. The story is presented with great drama to a child who usually swallows it whole. The problem is eventually the child notices there is no evidence for the myth and that other people believe different myths. Without cohesive social pressure, the belief in the myth dissolves and along with it, morality.

Those who posit an all-powerful God to inflict this punishment have a problem. Why do the good have such a rough time here on earth? Either this God is incapable of protecting them, does not care, or is sadistic in his trials. God may be feared, but not loved, at least not honestly.

What I am going to try to do is invent a morality that does not depend on a religious myth. With some modification, it may form a firmer foundation to teach your child. It should not conflict with any religious myth you also teach.

Beware of false prophets, which come to you in sheep’s clothing, but inwardly they are ravening wolves.
~ Matthew 7:15

Jesus warned about false prophets, those who have learned to manipulate the symbols of Christianity to evil ends, yet people fall for them time and time again because they are conditioned to the symbols rather than the essence of his message. They don’t take time to examine deeds. They hear only the wolf’s unctuous tones. There is a movie called Bob Roberts about a corrupt politician who wrapped himself in the Bible and the flag to bamboozle people. There are scores of real life examples that spring to mind, such as George W. Bush and Jim Bakker.

Animal morality is pretty much based on self-preservation and preservation of the young. Some animals warn the herd of danger. Dolphins, whales and elephants care for the sick and elderly even when they are not relatives. In that, they are superior to some human societies.

The prime directive in Rational Morality is to preserve the environment in which humans live so that it will continue to be a suitable place to live and grow food for generations to come. You can’t then emit poisonous gases that kill plants where your neighbour lives. You can’t do things that would strip the soil for future generations. You must carefully manage resources like fisheries so that there will be plentiful stocks for all time to come. You can’t emit greenhouse gases so fast the biosphere can’t absorb them. You work to preserve maximum biodiversity because we know that produces the most stable, healthy ecosystems.

You must not allow some people to gorge so much that they endanger their health where others literally starve to death. The powerful naturally tend to become more powerful. You must tend to counter that so that they don’t trample over the weak. The powerful will naturally have more than the weak, but they should not be permitted to starve the weak to death or force them from their homes. Power corrupts, so you must keep an eye on powerful people and keep them in check.

Anything so dangerous that a slip could wipe out the species must simply not be tolerated. This includes nuclear weapons, artificial diseases for warfare and any toxin capable of destroying the ocean’s plankton.

You work to reduce your footprint on the earth, avoiding wasting resources, trying to damage it as little as possible in your passing.

How Do You Decide What Is Moral?

The usual religion-based moralities make up long lists of dos and don’ts. The problem is, there is no mechanism to revise these as society changes. Over time, they end up recommending silly, or immoral behaviour and fail to cover many new situations.

Expand your love, your consciousness and your loving compassion by experiencing everything that everyone does or says as though you yourself had done it.

When you are deciding on a moral action, just imagine the situation through the point of view of each of the affected parties, what their take would be. Then make your decision keeping all of that in mind.

Finally you have an ultimate loyalty to life as a whole. Even if man insists on going extinct, you should work to see to it that some life survives.

When we discover life in other parts of the galaxy and the universe, eventually will have to broaden morality to include that as well.

Not So Good Books