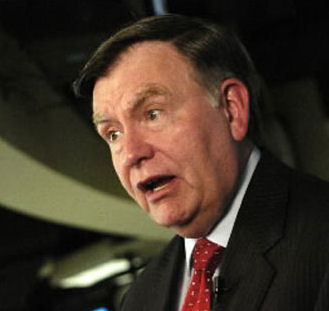 On 2008-11-05, Mike Duncan, chair of the RNC (Republican National Committee), RNC at the National Press club explained the core values of the Republican party: These core values sound like motherhood. You’d think almost everyone would agree with them. But they are actually code words for something quite different, unpopular and sinister.

Most people think lower taxes when they hear smaller government. This is true, but when Republican mean lower taxes, they mean lower corporate taxes and lower income taxes on the wealthy. They want lower government spending on education, regulation, the environment and social safety nets, but they want increased spending on the military, prisons and law enforcement, particularly property and drug crimes. However, they want lower spending on prosecution of white collar crime.

They refer to lower taxes for the middle class as socialism or wealth redistribution which they oppose. This is a misuse of the term socialism which means state ownership of key businesses, most commonly power generation, health care, ferries, railways, airlines, oil, insurance, water and telephones. Often a socialist business competes with ordinary capitalist businesses. Sometimes socialist business has a legal monopoly.

More extreme members of the Republican party refer to lower taxes for the middle class as communism. Communism means that goods should be distributed purely according to need, with no regard to effort expended. Any income tax rewards greater effort with greater reward, so it is not communism. The only exception I am aware of is the 100% tax on welfare recipients whose benefits are reduced a dollar for every dollar they earn and the odd rule that home businesses of people on welfare are taxed at 100% of gross earnings. This ensures such a business inevitably must lose money. These two rules strongly discourage enterprise on the part of those at the bottom of the financial heap.

What is so strange is Americans simultaneously express a strong desire to reduce government regulation, but recoil in horror at China, a country with low regulation.

I recall my great nervousness flying in an Air Garuda plane in Indonesia, wondering if the Indonesian government had inspection and regulation approaching that of Canada or the USA.

I wouldn’t dream of buying a pharmaceutical in a third world country where there is no government inspection and regulation. I have read that nearly all African pharmaceuticals are watered down, adulterated or counterfeit. That is what corporations naturally do if not regulated because it is cheaper to make fake drugs than real ones.

In 1976, in preparation for writing software for a Canadian credit union, I went on a course in the USA to learn about how the American savings and loan industry worked, in particular in relation to Univac’s First/90 American banking package. I was shocked to learn that every S&L had its own way of computing interest. It was considered a semi-proprietary secret, a way of deliberately deceiving their customers. Univac did not even bother to provide a default honest module. Surely banks and financial institutions should be regulated to be as honest and safe as other industries.

Strong defence really means strong offence, attacking other countries preemptively who are no threat to American security, but who have resources America wants or who threaten the profitability of American corporations.

Individual responsibility really means set up a system so wealth flows from the poor to the wealthy creating an ever wider wealth gap, the classic — the rich get richer and the poor get poorer. It means leaving those at the bottom to go without food, shelter or health care, even when providing shelter is cheaper than dealing with the consequences of the homeless. It means using economic and military power to take advantage of third world countries, ensuring their populations get paid no more than a dime an hour, leaving them to go without food, shelter or health care, burning out and dying before their 30th birthdays in order to provide goods and resources for the USA.

But it does not mean that at all. It means enthusiastic persecution of homosexuals, taking away their civil rights and ensuring they are treated as second class citizens. Republicans fight to deny homosexuals the right to marry, to collect survivor pensions, to qualify for joint income tax benefits, to teach, to adopt, to parent, to hold onto ones biological children, to have secure homes and jobs. This is a milder version of the lynchings of blacks as community entertainment popular in the early part of the last century, all biblically justified by unscrupulous biblical lawyers who distorted the obvious intent of Jesus’s message.

As I see it, the only permanent solution to the stand off between the pro life and pro choice factions is improved birth control. Unfortunately, the religious right core of the Republican party are almost as opposed to birth control and sex education too.

The Republicans also feel they have the duty to interfere with the sex and HIV (Human Immuno-deficiency Virus) education programs of other countries, to replace practical fact-based ones with religious/superstition-based ones which are worse than ineffective because they increase the spread of disease and unwanted pregnancy.

Even the Republicans are ashamed of their core values. That is why they disguise them with misleading names, hoping to glean votes from the naïve who take the terms at face value. Dishonesty is the core value common to these four. Dishonesty is thus the essential Republican core value. You see this core value in their campaign tactics which are based on straw men fallacies lying about their opponent’s platforms, then ridiculing them and smearing their opponents with scurrilous lies.