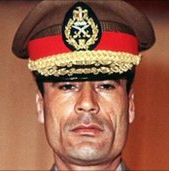 Muammar Gadafi (also spelled Gaddafi, Ghadafi, Gadhafi, Kadafi, Khadaffi, Qadhafi, al Gathafi, al Qaddafi, Algathafi, Al-Gaddafi, Kadafi, Gadafy and Al-Gathafi. Gadafi himself transliterates the Arabic many different ways.) pictured in the top left corner, before he lost his looks) is clearly a bad guy. He is dictator of Libya, egomaniac, eccentric fashion designer and fruitcake. The world suddenly decided to invade Libya to oust him. Though I like the idea getting rid of dictators and apartheid regimes such as Israel, helping establish democracies, I have grave doubts about this particular action.

There are some advantages to attacking Libya:

So what should we do?