I am frustrated with Americans wringing their hands over Iran developing nukes when they are the ones who created the problem. What do I mean by that?

The United States has threatened nuclear war and has already invaded Iran in yet another oil grab, pretending that the invasion is self defence against the peaceful use of nuclear energy. George Bush as been threatening to use small nuclear bunker busters to attack Iran. I consider this not only a foolish move, but a suicidal one.

On 2002-01-19 [in the SOTU ] George W. Bush identified Iraq, North Korea and Iran as the axis of evil and proceeded to invade Iraq and depose its leadership. North Korea’s leaders saw the writing on the wall and promptly developed a nuclear capability, which (as they no doubt anticipated) has put an end to any musings about the United States invading them too. Shortly afterward Iran put its nuclear program into high gear, aiming to create enough ambiguity as to whether it possesses nuclear weapons, or could assemble them quickly, to squelch any thoughts of an invasion in the mind of the Great Satan.
~ Steven Pinker (1954-09-18 age:63) The Better Angels of Our Nature: Why Violence Has Declined

Why Did Bush/Obama Threaten War?

Why did Bush/Obama make this threat? He claims it is to prevent Iran from developing nuclear weapons. However, this does not make sense. Iran has been using uranium since the 1950s for peaceful nuclear power, using reactors originally provided by the USA. There have been no violations in all that time of the inspection procedures. Iran has a rich supply of uranium, so it makes sense for them to continue to generate electricity that way. Bush is demanding they stop enriching uranium and hence both the peaceful use of nuclear power and the potential use in nuclear weapons, that they might in theory develop in 8 to 10 years. Even if they did develop nukes, they would still not have the means to deliver them by missile to the USA. Even if they did not develop nukes, they could always buy them on the black market anyway. So I think Bush’s reason for threatening Iran is bogus.

Bush is tacking in the polls with scandals and the fruits of his incompetent policies. He is also desperately looking for a diversion to unite the American people behind the Republicans.

Why It Would be Foolish To Invade Iran

The United States has spent a trillion dollars unsuccessfully trying to subdue Iraq. It was completely disarmed and broke. Iraq had no allies. It was divided into three warring factions. It had a leader despised by his people. Yet even with the total might of the US military, more costly than all the militaries of the world combined, the USA still could not break the will of that tiny country.

The USA is already stretched thin with wars in Afghanistan and Iraq. It cannot afford another.

Iran is three times more populous bigger, wealthy from its oils sales and much better armed than Iraq with weapons such as Sunburn missiles capable of sinking air craft carriers. It also has powerful military allies, Russia, China and Syria. Bush announced he was going to attack Iran back in 2002. The United States sold poison gas on credit to Saddam to use on the Iranians. Over a million people were killed in that proxy war lasting from 1980-09 to 1988-08. The Iranians have a score to settle with the USA. There is no reason for them to refrain from using chemical, biological or nuclear weapons.

Iran and many other countries seeing the ambitions of American empire, have had plenty of time to purchase and smuggle nuclear weapons into the USA that can be fired remotely by telephone or the Internet. If the USA nukes Iran, why should the Iranians feel any compunction at all about giving Americans a taste of their own medicine?

Because Iran is so well connected, America can’t very well invade it without getting into fights with other countries. There is simply too much danger of the fight escalating into a conflagration that consumes the entire middle east.

The Strait of Hormuz

The Strait of Hormuz is a narrow neck of water in the Persian Gulf between Iran and the Oman. Iran has threatened to block them, possibly by sinking ships, mining them, or shelling ships passing through them. 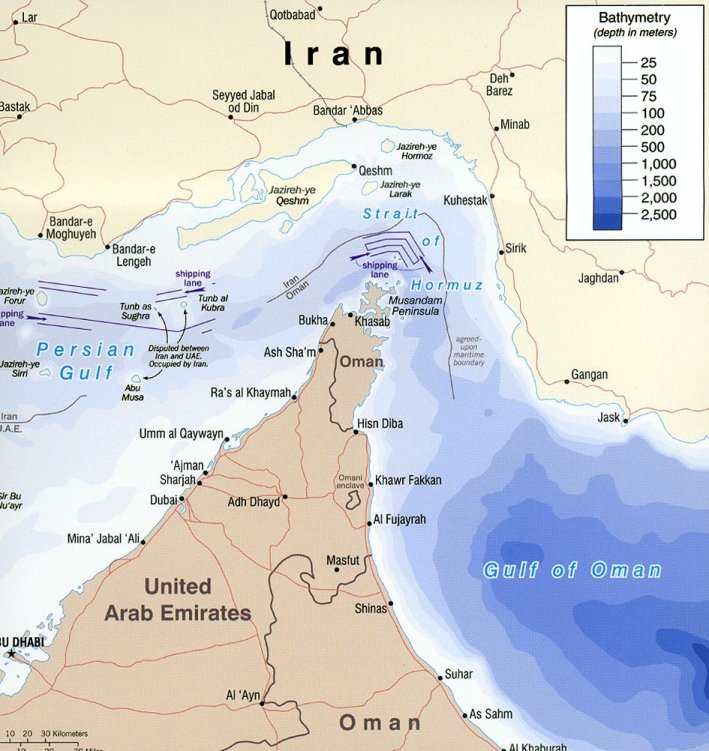 Consider that oil tankers from Iraq, Iran, Saudi Arabia, Qatar, UAE (United Arab Emirates) and Kuwait all must pass through it.

Have a look at the following chart of the world’s top oil producers and guess what mining that Strait would do to gasoline prices in the USA.

Invading Iran is so obviously a stupid idea, you might say so what? No one in their right mind would do such a thing, so why worry about it? But it appears Bush has already started his war with Iran, much the way America fought a secret war in Cambodia. Here is the opening paragraphs of Representative Dennis Kucinich’s letter to Bush. I suggest you read the entire text by following the links at the end of this essay.

Mr. Speaker, on April 14, 2006, I sent the following letter to President Bush regarding reports of United States troops conducting military operations in Iran:

Dear George W. Bush: Recently, it has been reported that U.S. troops are conducting military operations in Iran. If true, it appears that you have already made the decision to commit U.S. military forces to a unilateral conflict with Iran, even before direct or indirect negotiations with the government of Iran had been attempted, without UN (United Nations) support and without authorization from the U.S. Congress.

The presence of U.S. marines in Iran constitutes a hostile act against that country. At a time when diplomacy is urgently needed, it escalates an international crisis. It undermines any attempts to negotiate with the government of Iran. And it will undermine U.S. diplomatic efforts at the U.N.

Furthermore, it places U.S. troops occupying neighboring Iraq in greater danger. The achievement of stability and a transition to Iraqi security control will be compromised, reversing any progress that has been cited by the Administration.

The Doomsday Code: the nutty apocalypse religious beliefs believed by 59% of Americans that are driving the USA to create Armageddon (nuclear war) on purpose. This nutty Rapture cult infects the White House. It is what drives the Christian Right political and financial support of Israel’s takeover of the middle east and drive to destroy third holiest Muslim Dome of The Rock mosque to rebuild a Jewish temple.

2005-01-24
2006-04-17
CIA Analyst say strike likely in 2006-06 or 2006-07
Counterpunch: Iran’s nuclear history
Seymour Hersh’s articles on the secret invasion of Iran in the New Yorker. He is the Pulitzer prize winner who broke the Mai Lai Massacre and Abu Ghraib torture camp stories