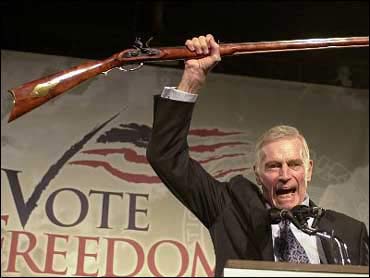 The Case for Gun Control

Here are the reasons I favour gun control:

I personally don’t approve of hunting, but I think it would be excessive to ban it. Hunting should not be conducted with concealable weapons, automatic weapons, or weapons with more than 6 rounds. The bullets should not be capable of piercing armour. This would make hunting a much safer sport since hunters could wear Kevlar to protect themselves from fellow hunters.

I think it is reasonable to have gun-free zones, for example airports, police stations, sporting events, political rallies, malls, theatres, bars, bowling alleys, schools, amusement parks, restaurants… This is not that different from the old west where the cowpokes had to check their six guns at the bar. It is one thing to cache weapons at home and another to go out looking for trouble with them. Basically I think the owner of any establishment should have the right to make it a weapons-free zone. Further, if are shootings on the property, a judge should have the right to declare a property a weapons-free zone, including private homes.

I think it reasonable to insist that any weapon transported on a vehicle be carried in a locked box, disassembled and separate from ammunition. There in no legitimate need to shoot from a moving vehicle.

In the United States the issue is complicated by the second amendment of the constitution. For Americans to get serious about gun control, they would need to change their constitution, or at least reinterpret it, which supreme court decisions have twisted far from its common sense meaning.

The constitution is a document written in times very different from today. People today are just as wise as then and should be permitted to choose how to run their society and change the constitution to say whatever the consensus pleases. However, in the meantime, the literal meaning of the second amendment should prevail:

A well regulated militia being necessary to the security of a free State, the right of the People to keep and bear arms shall not be infringed.
~ Second Amendment

The way I read it, it is a states right clause, giving the state the right to keep a militia, with people keeping their weapons at home and bearing them for militia duty. Consider the times. States were very suspicious of each other and of the federal government overpowering them. They were in a position like today if the USA and Europe formed a common political union. I know this is not the current legal interpretation, but it is the literal common-sense meaning. If it meant some blanket right, the first clause would not have been included.

There was a news item that Americans are stocking up on all manner of guns fearing the new Obama administration will restrict their use. They want a chance to hide them before the sale and possession becomes illegal.

It is odd that folk who claim to worship the constitution are so clearly planning the break the law. The hypocrisy is not much of a surprise. These same people refused to say boo when many of the other clauses of the constitution were trampled with the Patriot Act and by Bush’s Presidential degrees e.g.

The right of the people to be secure in their persons, houses, papers and effects, against unreasonable searches and seizures, shall not be violated and no Warrants shall issue, but upon probable cause, supported by Oath or affirmation and particularly describing the place to be searched and the persons or things to be seized.
~ Fourth Amendment

No person shall be held to answer for a capital, or otherwise infamous crime, unless on presentment or indictment of a Grand Jury, except in cases arising in the land or naval forces, or in the Militia, when in actual service in time of War or public danger; nor shall any person be subject for the same offense to be twice put in jeopardy of life or limb; nor shall be compelled in any criminal case to be a witness against himself, nor be deprived of life, liberty, or property, without due process of law; nor shall private property be taken for public use, without just compensation.
~ Fifth Amendment

In all criminal prosecutions, the accused shall enjoy the right to a speedy and public trial, by an impartial jury of the State and district where in the crime shall have been committed, which district shall have been previously ascertained by law and to be informed of the nature and cause of the accusation; to be confronted with the witnesses against him; to have compulsory process for obtaining witnesses in his favor and to have the Assistance of Counsel for his defense.
~ Sixth Amendment

Excessive bail shall not be required, nor excessive fines imposed, nor cruel and unusual punishments inflicted.
~ Eighth Amendment

The enumeration in the Constitution, of certain rights, shall not be construed to deny or disparage others retained by the people.
~ Ninth Amendment