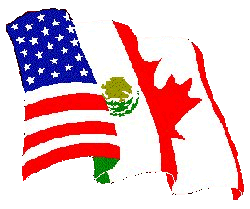 You may have heard terms like NAFTA (North America Free Trade Agreement), FTAA (Free Trade Agreement of the Americas), free trade and globalisation. You may be aware that some people are violently opposed, willing to risk their lives to protest. Never do the news commentators explain why. I am going to do that for you. It turns out the protesters in general are in favour of free trade, just opposed to the way it has been implemented. It also turns out the politicians have pulled a boondoggle so outrageous it is hard to believe they are getting away with it.

In 1992 Canadian Prime Minister Brian Mulroney, the American President George Bush Senior and Mexican President Salinas signed a free trade agreement called NAFTA. It took effect 1994. It dropped duties on trade between the countries and made it easier for companies in one country to invest in the other two. So far so good.

The negotiations were arduous. To push negotiations along, at the last minute, the Americans tried a bluff, a bargaining chip they intended to push then withdraw. This was the famous chapter 11 you will hear so much about. Chapter 11 has nothing to do with bankruptcy; it is a section of the agreement that gave outrageous powers to foreign corporations. To the American negotiator’s surprise, the Canadians accepted it.

In 2002, negotiations are underway to extend NAFTA to include 31 new North and South American countries. This new agreement called FTAA has an even stronger version of chapter 11.

Protests are heating up. The Canadian government announced it would shoot free trade protesters. The right wing Bush administration in the USA and the right wing Harper government in Canada have funded a propaganda blitz to persuade the public that anyone who has any reservations about NAFTA is a raving lunatic.

Soon after the US petroleum production had peaked, official policy began emphasising free trade as a global panacea for unemployment, underdevelopment and virtually every other economic and political ill. Through the manipulation of the rules of global trade, the US sought to maintain and increase its access to natural resources worldwide. Those rules — written primarily by US-based corporations and encoding in policies of the International Monetary Fund ( IMF (International Monetary Fund)), the World Bank and the World Trade Organisation (WTO (World Trade Organisation)) as well as treaties like the North American Free Trade Agreement (NAFTA) — essentially said that wherever resources lie, they must be available for sale to the highest bidder. In other words, whoever has the money to buy those resources has a legally defensible right to them. According to those rules, the oil of Venezuela belongs to the US every bit as much as if they lay under the soil of Texas or Missouri. Meanwhile technology, or intellectual property, was regarded as proprietary; thus nations with prior investments in this stragetgy were at an advantage while underdeveloped nations were sysetatically discouraged from adopting it.
~ Richard Heinberg (1950-10-21 age:67), The Party’s Over

In other words free trade and globalisation are a heads-I-win, tails-you-lose game rigged in favour of the USA. That is partly how the USA, with only 1/20 of the world’s population, manages to hog most of the planet’s resources.

The Case Against NAFTA in a Nutshell

What is the Matter with the Free Trade Agreement?

There are many complaints, most centering around chapter 11. The agreement gives foreign corporations the right to sue the government for any lost profit and any lost future profit as a result of any government action, even when the corporation was selling a harmful or dangerous product.

You may be coughing just now, saying preposterous, no government in their right mind would hand over such a blank cheque to foreign corporations. That was my reaction when I heard about it Bill Moyer’s documentary Trading Democracy. Keep in mind who made the agreement — Mulroney and Bush senior, men known for promoting the interests of the corporations over citizens. Because Chapter 11 gives the corporations the right to sue for billions in lost profit, it gives foreign corporations immense political power as well.

There are two other major problems with free trade:

You may say, "Yes, such ripoffs may be possible in theory, but in practice, nothing that outrageous would be allowed to happen." Bill Moyers, a respected PBS (Public Broadcasting System) journalist documented a number of abuses, which I summarise below. All amounts in the following exposition are in:

Why would any government in its right mind sign such an agreement that so seriously undermines its own authority?

This is NAFTA extended for the Pacific rim countries. It exempts foreign countries from Canadian law. It allows a foreign corporations to sue Canada any loss of profit via foreign tribunals. Further, Canada is not permitted to change any environmental or labour safety laws once a foreign corporation makes an investment. Prime Minister Harper is extremely keen on Canada signing this pact because it gives many new rights to corporations and many new obligations to goverments.