How To Make Your Life Work

The main problem in making your life work is that your ego and rational mind keep you trapped in playing out the security, sensation and power demands that you programmed into your biocomputer during the first few years of your life. You are stuck in these ineffective ruts that make you like a yo-yo bouncing between pain and pleasure. By continually trying to work the unworkable, you blindly repeat your mistakes in a manner that is perhaps more insistent than that of most lower animals.

Werner Erhard has pointed out that even a rat does not usually get hung up in a fruitless repetition of lifetime patterns that are doomed to failure. Let’s suppose there are seven tunnels arranged side by side — and you put some cheese at the end of tunnel three. Then you turn a rat loose at the entrances to these tunnels. It will sniff around, maybe look them over and then in a random fashion explore the tunnels until it finds the one with the cheese. The next time you put the rat near the tunnels, there may be a certain amount of random behavior, but there is a much greater probability that it will go after the cheese in tunnel three. After the rat has done this a few times, it will immediately run down tunnel three to get the cheese.

One day in a rat’s life corresponds to about one month in a human life. Suppose that for a period of 60 days the rat finds the cheese at the end of the third tunnel. This would be equivalent to about five years in a human life. Then suppose the cheese is moved from tunnel three to tunnel four. Now we put the rat near the tunnels and he again runs down tunnel three to get the cheese. But the cheese isn’t there any longer. The rat will come out, look the scene over and try tunnel three again. He may repeat this several times. But after a few repeated trials, with no more cheese, the rat will stop going down tunnel three and start exploring the other ones.

A big difference between a rat and a human being is that a rat won’t continue to run down the tunnel that does not provide cheese — whereas a human being may continue to run down the same tunnel for his entire lifetime trying to find the cheese that isn’t there! Sooner or later the rat will give up on tunnel three, since it doesn’t have a rational mind to continually analyze, compute and try to prove that the cheese is down tunnel three — because it used to be there. A rat cannot go to a library to read books about cheese and how one is supposed to be able to get it. It cannot formulate arguments or make speeches proving that the cheese should really be down tunnel three; and it cannot try to convince fellow rats that there really is cheese down tunnel three even though it is in fact not there. The nervous system of a rat will quickly adapt to the fact that the cheese just isn’t where it used to be and it will start looking somewhere else.

When you were two years old, you probably learned that the way to get the cheese (or whatever you wanted) was to scream loudly and try to power-trip your parents. They seemed to control all the cheese. If you cried and fussed enough, by using your Third Center of Consciousness, you could get them to give you candy or let you stay up late at night, or whatever it was that you wanted. You were largely unconscious of the overall picture and your ego kept your awareness focused on your fears and desires. When you looked at life, it was as though you were looking through the end of a long tunnel and saw only a tiny spot of the world at the end of the tunnel. The overall picture of life was blocked out by the sides of the tunnel. Your immature biocomputer permitted your fears and desires to project on the screen of your consciousness only a tiny slice of the life realities around you. You had no real choice in your life because you had no wide-range perception of the people and events around you.

By age two, you had deeply programmed yourself by using crying to force changes in the people and things around you. At that time in your life, this was one of the few ways you had to get what you wanted from the world. It is difficult to explain to a two-year old that the lower three levels of consciousness generate unhappiness and that the really big stash of cheese is located at the end of the Love Tunnel and the Cornucopia Tunnel. How do you tell a young child that there is only a little dab of low-grade cheese which will never be enough at the end of the Security Tunnel, Sensation Tunnel and Power Tunnel? How do you show a young child that he can have all the cheese that he could ever want by harmonizing his energies with the flow of the people and situations around him? How do you explain to a crying child that loving acceptance of the here and now is the only way that brings continuous happiness in life?

And so you get used to running down the Security Tunnel, Sensation Tunnel and Power Tunnel hunting for the cheese. The fact that you are reading these words right now indicates that you are getting suspicious about the first three tunnels and are beginning to explore the Love Tunnel and the Cornucopia Tunnel. You know there must be more cheese in life than you have been getting. Diagram 1 shows you why your life hasn’t been working and Diagram 2 shows you how to clearly start getting the cheese that has always been waiting for you in life but which you couldn’t get because you persisted in trying to find it down the wrong tunnel. Your life is naturally good. It has always been workable. It’s just that your biocomputer kept making the same perceptual mistakes over and over and over again.

Why isn’t your life working as it should? What is pouring sand in the gears? The problem is simple: your programming continually directs you to find happiness by trying to change the life energies around you. You put most of your attention and energy into trying to manipulate the people and situations in your life. Since you found some cheese at the end of tunnel three during the immature, early years of your life, your ego and your rational mind continue to direct most of your energy into changing the life energies around you to fit your addictive inner programming (see the top box in Diagram 1 on next page.)

Now let’s follow the cycle around to discover how you create a hell from the world in which you live — when heaven is there all the time! The words and actions of people are sent by your various senses into the analytical and interpretive sections of your biocomputer. When outside patterns do not fit your inner programmed patterns, you respond with negative emotional feelings such as anger, fear, jealousy, resentment, etc. and create your experience of unhappiness (see right-hand box and bottom box in Diagram 1).

This leads you to the fourth phase of the Wheel of Unhappiness. You then begin to criticize and reject yourself and others. You communicate with words, vocal tones, facial expressions and body gestures that either you are rotten or the world is rotten, or perhaps both. Your rational mind criticizes other people and finds fault with them. It gives you reasons why they are fools, idiots, uncaring monsters, evil beings, or whatever. Or you may use programming that turns your rational mind against yourself and creates the experience that you are inadequate, hopeless, inept, dumb, inferior, crazy, or whatever.

This alienating subject-object feedbackthen begins to change the behavior of people and the characteristics of the life conditions around you (we’re back to the top box in Diagram 1). In other words, your negative feedback begins to make a dramatic change in the response of the people and conditions around you. You thus create an environment of antagonistic people and situations. Now the Wheel of Unhappiness begins to turn and the people around you begin to respond with words and actions that reflect their negative feelings to your criticism and rejection. Then this feeds back into your emotional programming and triggers more anger, fear, jealousy, or up-tight emotions. And you react by criticizing yourself more and criticizing others more. (See left-hand box in Diagram 1.) This feeds back into the people and situations around you and turns them against you even more… And things become even worse in your life as the cycle turns and turns and turns in a downward spiral. Your rational mind may accept this downward spiral as proof that your life is impossible, that people are horrible and that there is no way of making it in life.

How You Create Unhappiness In Your Life 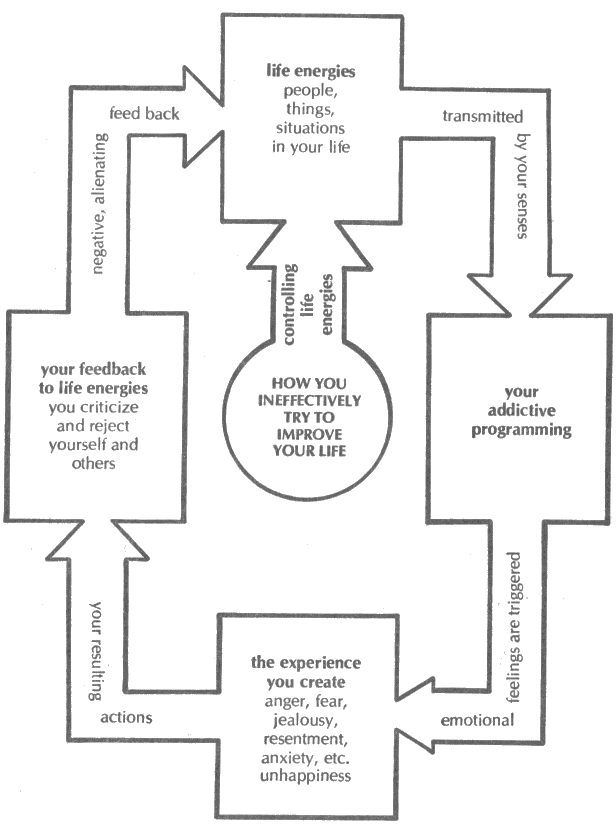 How You Create Happiness In Your Life 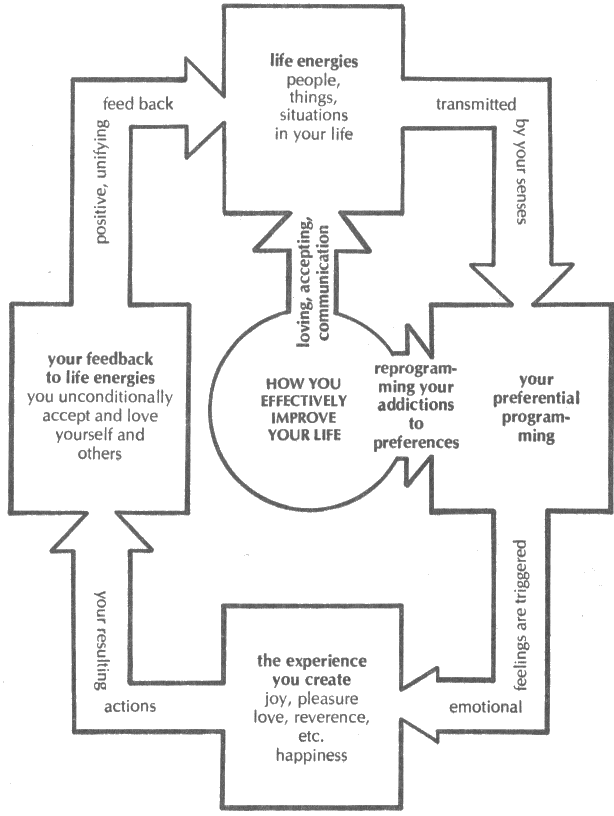