I came across your article Don’t Marry a Soldier while surfing Google looking for places to visit on leave from my deployment to Iraq. The only thing I have to say to you is GO FUCK YOURSELF! I don’t mean to seem so brash, but you have no fucking clue what you’re talking about. You took just about every stereotype of a military person and tried to write an educated sounding rant with them.

Follow the links on my website and you will find plenty of newspaper stories to back up these generalisations.

Yes, some of these things are happening to men and women in Iraq and Afghanistan… it’s the nature of a war, but don’t make it out to be like even one percent of soldiers in theater are shooting up heroine and raping little kids. When these things happen, they don’t happen because of peer pressure, they are covered up because of peer pressure. You man not agree with the war, but take a poll of the people in the military and you will probably find out that most soldiers aren’t in the military to fight for freedom, it’s a job and I don’t know where you are hearing that women on welfare live better than military wives, but I know plenty of happily married privates (lowest ranking army personnel for those who dont know), with childen, living in clean, sturdy, single family homes. We, for the most part, realize that this is not our battle. There is no self serving reason for the US military being over here, risking soldiers’ lives for the people of Iraq. We realize that not every person in Iraq is evil, but that the evil would have the upperhand if we were to leave.

The governments you Americans installed in Afghanistan and Iraq are just as brutal as the ones you replaced and far more corrupt. The only difference is they kiss American ass. The soldiers don’t care whom they are killing. They will kill whomever they are told to. They kill primarily civilians and of those primarily kids, (If you drop a bomb on an Iraqi house it might contain 3 adults and 10 kids.) so obviously the killing has nothing to do with the sins of the victims. Soldiers (including you) kill because they get off on killing. There were thousands of other possible occupations you could have trained for, many far better paying, but you choose butchering civilians who were zero threat to your country. You are one sick puppy.

Not only do you lie to others, you lie to yourself. That fundamental dishonesty disqualifies you from matrimony.

The newly founded government is still learning to distribute funds effectively and what types of programs the country can provide for its people. Although the Iraqi populace may resent the US occupation of their nation, the few I have talked to have unanimously declared todays current situation much better than in the days under Saddam.

If you were in occupied France in WWII (World War II) and a Nazi soldier asked what you thought of the occupation, you would be a bloody fool to say anything but high praise. You Americans routinely torture people, including kids, something the even the Nazis did not do. Of course, Iraqis will feed you crap like that to killers in occupation uniforms. Nobody wants his country occupied. Polls done by civilians show nearly everyone in Iraq (including the provisional government) want the Americans to leave.

Holy shit it burns me up to listen to people shit talk soldiers. Shit talk the war all you want. It is a stupid war. Whatever. Don’t shit talk those soldiers watching out for each other, trying to make it home alive.

You forgot that you chose to go to Iraq. It was purely optional. Iraq was zero threat to the USA. Your sadism dragged you there by your pervert-balls. Sympathy is the last thing you deserve. What you are doing is as lame as drug dealer complaining about the gang wars spoiling his day.

I also shit talk Nazis. What you are doing is just as bad. You personally are the one doing the killing, maiming and torturing. You deserve far worse than a bit of shit talk. You deserve to hang as the war criminal you are. 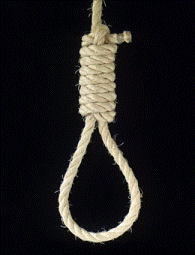 A prima facie case can be made that the United States is guilty of the supreme crime against humanity, that being an illegal war of aggression against a sovereign nation.
~ Benjamin Ferencz (1920-03-11 age:98) Chief Prosecutor for the United States in The Einsatzgruppen Case at the Nazi Nuremberg War Crimes Trials.

You are brazenly guilty of an international war crime namely aiding and abetting an aggressive war. The USA attacked Iraq unprovoked. Further, it turned out their justifications were bogus too. That is a hanging offence. Bush is doing all he can to protect you from the world court. Even president Obama might stop thumbing the USA’s nose at the authority of the world court allow you to be tried and hanged.

I wouldn’t join the International Criminal Court. This is a body based in The Hague where unaccountable judges, prosecutors, could pull our troops, our diplomats up for trial. And I wouldn’t join. And I understand that in certain capitals of, around the world that that wasn’t a popular move. But it’s the right move not to join a foreign court that could, where our people could be prosecuted.
~ George W. Bush (1946-07-06 age:71),, 2004-10-01 confessing he is an international scofflaw during the first presidential debate with Kerry.

Just sit in front of your computer, drink your fucking chai and don’t badmouth a group of people you know nothing about.

Soldiers are so careless. I just sit quietly and listen and become effectively invisible. They ramble on and confess to crimes far worse than any civilian serial murderer.

You are so deep in denial about your own personal evil. You are like serial murder Robert Pickton who sliced up dozens of women, imagining he was doing society a favour.

I feel uncomfortble giving the following bit of your pornography public airing, but I chose to include it, to help the public understand the warped mind of a typical American serial killer/soldier.

P.S. I challenge you to rebut.

I decline your invitation because the suitability of bloggers, dwarves, gays or even Republicans as husbands is equally irrelevant to the issue of whether soldiers make good husbands. Besides you offered no supporting evidence for your screed against bloggers, just your warped and exhibitionistic sexual fantasies about them. I can’t very well rebut pure fluff. Perhaps you intended this as a personal attack against me. If so, it fell flat. I am not a blogger. I have a few blogs attached to my website, but I spend about 5 minutes a month on them, just to remove spam. I don’t think you even know what a blogger is. I have a dim view of blogs too, but for different reasons.