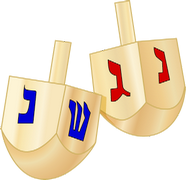 Intro: There’s a lot of Christmas songs out there, but not too many about Hanukkah, so I wrote a song for all those nice little Jewish kids who don’t get to hear any Hanukkah songs. Here we go…

Put on your yarmulke, it’s time for Hanukkah
Its so much fun-akkah to celebrate Hanukkah,

Hanukkah is the Festival of Lights,
Instead of one day of presents, we have eight crazy nights.

But when you’re the only kid in town without a Christmas tree, here’s a list of
people who are Jewish, just like you and me:

Guess who eats together at the Carnegie Deli,
Bowzer from Sha-na-na and Arthur Fonzerrelli.

Paul Newman’s half Jewish; Goldie Hawn’s half too,
Put them together — what a fine lookin’ Jew! [Esus]

You don’t need Deck the Halls or Jingle Bell Rock
Cause you can spin a dreidel with Captain Kirk and Mr. Spock — both Jewish! [Esus]

Put on your yarmulke, its time for Hanukkah,
The owner of the Seattle Super sonic-ah celebrates Hanukkah.

O.J. Simpson — not a Jew!
But guess who is— Hall of Famer Rod Carew (he converted!)

We got Ann Landers and her sister Dear Abby,
Harrison Ford’s a quarter Jewish — not too shabby!

Some people think that Ebeneezer Scrooge is,
Well, he’s not, but guess who is: All three stooges. [Esus]

So many Jews are in show biz
Tom Cruise isn’t, but I heard his agent is. [Esus]

Tell your friend Veronica, its time to celebrate Hanukkah
I hope I get a harmonica, on this lovely, lovely Hanukkah.

Lenny Kravitz is half Jewish,
Courtney Love is half too
Put them together
What a funky bad ass Jew

O.J. Simpson
Still not a Jew
But guess who is,
The guy who does the voice for Scooby Doo

Bob Dylan was born a Jew
Then he wasn’t
But now he’s back,
Mary Tyler Moore’s husband is Jewish
’Cause we’re pretty good in the sack.

Guess who got bar-mitzvahed
On the PGA tour
No I’m not talking about Tiger Woods
I’m talkin’ about Mr. Happy Gilmore.

So many Jews are in the show biz
Bruce Springsteen isn’t Jewish
But my mother thinks he is.

Hanukkah is the Festival of Lights
One day of presents?
Hell, no, we get Eight Crazy Nights

Ross and Phoebe from friends say the Hanukkah blessing
So does Lenny’s pall Squiggy and Will and Grace’s Debra Messing
Melissa Gilbert and Michael London never mix meat with dairy
Maybe they shoulda called that show Little Kosher House on the Prairie?

We’ve got Jerry Lewis, Ben Stiller and Jack Black
Tom Arnold converted to Judaism but you guys can have him back
We may not get to kiss underneath the mistletoe
But we can do it all night long with Deuce Bigelow

Houdini and David Blaine escape strait jackets with such precision
But the one thing they could not get out of: their painful circumcision

Gwyneth Paltrow’s half-Jewish but a full-time Oscar winner
Jennifer Connelly’s half Jewish, too and I’d like to put some more in her

I hope you get an abtronika
On this joyful, toyful Hanukkah

So get a high colonika
And soil your long Johnikas

~ Adam Sandler You are visitor number