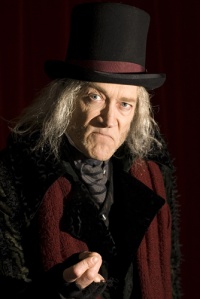 excerpt from A Christmas Carol by Charles Dickens

The door of Scrooge’s counting-house was open that he might keep his eye upon his clerk, who in a dismal little cell beyond, a sort of tank was copying letters. Scrooge had a very small fire, but the clerk’s fire was so very much smaller that it looked like one coal. But he couldn’t replenish it, for Scrooge kept the coal-box in his own room; and so surely as the clerk came in with the shovel, the master predicted that it would be necessary for them to part. Wherefore the clerk put on his white comforter and tried to warm himself at the candle; in which effort, not being a man of a strong imagination, he failed. A merry Christmas, uncle! God save you! cried a cheerful voice. It was the voice of Scrooge’s nephew, who came upon him so quickly that this was the first intimation he had of his approach.

He had so heated himself with rapid walking in the fog and frost, this nephew of Scrooge’s, that he was all in a glow; his face was ruddy and handsome; his eyes sparkled and his breath smoked again.

Christmas a humbug, uncle! said Scrooge’s nephew. You don’t mean that, I am sure?

Scrooge having no better answer ready on the spur of the moment, said, Bah! again; and followed it up with Humbug!

'What else can I be, returned the uncle, when I live in such a world of fools as this? Merry Christmas! Out upon merry Christmas. What’s Christmas time to you but a time for paying bills without money; a time for finding yourself a year older, but not an hour richer; a time for balancing your books and having every item in them through a round dozen of months presented dead against you? If I could work my will, said Scrooge indignantly,every idiot who goes about with ‘Merry Christmas’ on his lips, should be boiled with his own pudding and buried with a stake of holly through his heart. He should!

If quite convenient, sir.

It’s not convenient, said Scrooge, and it’s not fair. If I was to stop half-a-crown for it, you'd think yourself ill-used, I’ll be bound?

And yet, said Scrooge, you don’t think me ill-used, when I pay a day’s wages for no work.

The clerk observed that it was only once a year.

A poor excuse for picking a man’s pocket every twenty-fifth of December! said Scrooge, buttoning his great-coat to the chin. But I suppose you must have the whole day. Be here all the earlier next morning. You don’t believe in me, observed the Ghost. I don’t, said Scrooge. What evidence would you have of my reality beyond that of your senses?

Why do you doubt your senses?

Because, said Scrooge, a little thing affects them. A slight disorder of the stomach makes them cheats. You may be an undigested bit of beef, a blot of mustard, a crumb of cheese, a fragment of an underdone potato. There’s more of gravy than of grave about you, whatever you are!

You are visitor number