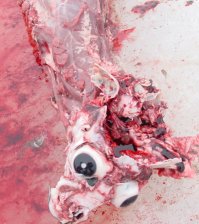 The Canadian commercial seal hunt is a barbaric bloodlust ritual where baby seals are beaten to death with spiked clubs and also skinned alive, all for no economic benefit, motivated by sadism and an irrational hatred of seals.

I wrote this essay to counter the propaganda put out by the Canadian DFO (Department of Fisheries and Oceans) that portrays the commercial seal hunt as humane and economically important.

To claim that a baby seal does not feel extreme pain while being skinned alive, does not pass the laugh test. Each year hundreds of thousands of seal pups are sadistically slaughtered. Let’s look at some of the bogus claims of the DFO.

Seals need to be culled because of over population.

There is no scientific data to support that claim. The DFO makes this unsubstantiated claim in a vain effort to justify the slaughter. Seal populations are a fraction of what they were before the commercial sealing program began.

Most seals are killed by being bashed oven the head with a spiked club called a hakapik (hack-a-pick). Others are shot. Because a baby seal’s brain is only the size of a walnut, it is extremely difficult to kill in one blow or shot. Many blows or bullets are required to render a seal unconscious or dead. The DFO ’s own studies have shown that over 6,000 baby seals are skinned alive each year. A panel of veterinarians gave a much higher estimate of 42% skinned alive.

If you seriously think spiked club is a humane way to kill, imagine the hue and cry if that method were suggested to slaughter steers, execute criminals, put down sick pets or euthanise the terminally ill.

One internatianl team of veterinarians discovered :

Strange as it sounds, the commercial seal hunt is not motivated by economics. The seal hunt is not economically viable because the cost to conduct the hunt (ice breaking, helicopters, administration, enforcement, etc.) exceeds the value of the hunt itself. Furthermore, the income earned from the seal slaughter typically makes up only 5% of a sealer’s income. As an industry, sealing is insignificant, accounting for a scant 0.06% of Newfoundland’s gross domestic product.

The commercial seal hunt has nothing to do with the subsistence sealing of the Inuit of the far north.

The commercial hunt could not continue without being unwittingly subsidised by the Canadian taxpayer.

Scientists have shown that 97% of a seal’s diet is fish other than cod, many of these being predatory fish that feed on baby cod. If you take away the seals you increase the number of predators which mean less cod. More seals have always meant more cod.

Consider that 200 years ago, there was no commercial seal hunt. Seals were much more plentiful than now and the cod were so thick you could walk across their backs according to contemporary accounts. The seal’s mild predation is actually helpful to the cod. The seals preferentially eat the sickest and weakest cod, which helps the overall health of the schools.

The true causes of cod stock depletion are overfishing and contamination of the oceans. The seals had nothing to do with that. The seals managed for millions of years without destroying the stocks.

Much of the seal is utilitised.

Only the skin and sometimes the penis is taken. The sealers sell the penises to the Chinese who grind the baculum (penis bone) up for an impotence folk remedy. The seal’s body is left to rot on the ice. Slaughtering seals serves one primary purpose: fashion. Baby seal skins make high fashion garments. Seal oil contains high concentrations of PCBs (Polychlorinated Biphenylses), DDT (dichlorodiphenyltrichloroethane) and mercury. It is not safe for consumption.

The DFO likes to point out that the seal populations are three times what they were in the 70s. What they don’t tell you is that the populations are still many times lower than they were before the commercial seal hunt started, back when the seas were most productive.

Sealing is an important tradition.

The Canadian commercial sea hunt is the largest slaughter of marine mammals on earth. Each spring hundreds of men carrying rifles or spiked clubs (hakapiks) invade the harp and hooded seal nurseries, clubbing and shooting baby seals who are barely weaned and lay helpless on the ice. If this is a tradition, then the majority of Canadians as well as the world community believe that is a brutal and bloody tradition and should be ended. We have given up many other traditional inhumane entertainments, such as scalping, bull baiting, cock fights, whale sacrifice and dog fights. In 2008 public outcry banned the hakapik and insisted seals bleed for a minutue before skinning.

On 2008-04-16 the CBC aired an incredibly amateurish and biased video on the seal hunt. It was like something some self indulgent pre-teens would have slopped together. They mocked Sir Paul McCartney for making an error in local geography and thereby implying he was too stupid to recognise deliberate cruelty when he saw it. They showed Newfoundlanders whining that they were misunderstood and it was just too cruel of the rest of the world to term their hunt barbaric, but by any objective standard the hunt is barbaric. Nobody would dream of killing cows or dogs that way! Asking the rest of the world to look the other way is as silly as asking us to look the other way to a nutcase who blinds horses with an icepick. Deliberately, needlessly and maliciously torturing mammals is wrong. Their excuse is morally equivalent to that of a pornographer of snuff videos who tried to excuse himself because he liked the money. I don’t care how long they have been doing it or how much money they make from it, or how many sexual jollies or warm fuzzies they get from it. It is as wrong as slavery or human sacrifice, (similarly justified on the lame grounds of tradition).

Motive For the Hunt

Since the hunt does not make money, you have to wonder what motivates so many people, including bloodless bureaucrats, to perpetuate the hunt. Where have we seen similar behaviour? The hunt is a sort of manhood ritual. Men get a thrill, a twisted sadistic sexual pleasure out of brutalising and killing the utterly defenseless. It is nothing to be proud of. It is not an institution worth preserving. It is part of our shameful barbaric past.

Man is like a four year old. He likes to tinker with things long before he has any understanding of how they work. He has destroyed all manner of habitats by removing predators such as wolves, large predatory fish and seals, imagining in his naïve way this would increase the productivity. Only recently is science beginning to discover how such predators are absolutely necessary for the health of ecosystems. The National Geographic did a documentary on the problem.

What do I want?

Ideally I would like the hunt stopped in its entirety.

Failing that, I want the clubbing of seals banned and skinning alive banned.

Failing that, all government subsidies for the hunt must end. It should totally pay its way through seal killing licences.

Failing that a world wide ban on all seal products and ostracism of anyone who uses or sells them. If the hunt is made too expensive to continue by taking away all its financial backing, perhaps it will stop.

What Can You Do?

Visit the Sea Shepherd Society for ideas on what you can do. You can participate in various seal product boycotts, boycotting both the products and anyone who handles them.

Ask the government to stop the subsidy in any form for the seal hunt, including the costs of regulation.

Write or email your Member of the federal Canadian Parliament or any other Member of Parliament or
Justin Trudeau
Office of the Prime Minister
80 Wellington Street
Ottawa, Ontario, Canada
K1A 0A2
Fax: (613) 941-6900
It is best to hand write your letter. However, in a pinch you can email:justin.trudeau@parl.gc.ca No postage is required to send a letter to any Member of Parliament. Only mail sent to the House of Commons in Ottawa (that is, House of Commons, Ottawa, Ontario, K1A 0A6) is eligible. Just write the letters O.H.M.S. where you would normally put a stamp.

Conservatives don’t yet have an interim leader.

On 2008-12-27 the Canadian Federal government announced the hakapik would be banned to avoid the seals being skinned alive. Sealers are furious. They defend their sadistic way of killing seals purely on the grounds they have done it that way in the past and they like doing it. However, the Canadian government bowed to a threat from the EU to ban Canadian seal products entirely if they did not make the way of killing more humane. Anyone who enjoys killing with a hakapik is subhuman and deserves to be hacked to death themselves. The sadism of one’s ancestors is no excuse. Everyone had to give up beating slaves, even whose families had beat them for generations. It is time to stop deliberate cruelty to seals.