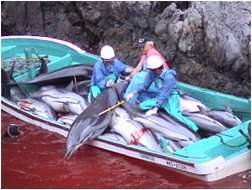 17,000 Dolphins About To Be Slaughtered

Fishermen in central Japan are set to begin hunting dolphins, an annual event which comes around every autumn. This year, however, the activity might trigger controversy after the recent international outcry over Japan’s whaling programme. The dolphin hunting season officially got under way on Sunday in the small port town of Taiji — the traditional home of Japanese whaling — some 450 km (279.62 miles) southwest of Tokyo. Poor weather has prevented fishermen from going out to sea so far, but they plan to catch a total of nearly 2,400 dolphins and smaller species of whales during the season, which runs until the end of April, a local official said. Both whaling and dolphin hunting are traditions that date back hundreds of years in Japanese society. But unlike Japan’s whaling programme, which Tokyo says is for scientific research purposes, dolphins are hunted purely to provide meat for consumption, a Fisheries Agency official said. The hunt was being carried out in accordance with International Whaling Commission (IWC (International Whaling Commission) ) rules, according to the Fisheries Agency official, adding that strict quotas were set each year. In addition to Taiji, dolphin hunting is allowed at several other ports and a total of nearly 17 000 dolphins are caught every season. This is a clipping of an article from the Internet Africa News Website (used here with permission). The subject of this article is so appalling that I decided to try and do something about it. Hopefully this email will make it’s way to others that feel similarly.

The Japanese in particular are eating more dolphins than ever. They claim a right to do this since they are eating fewer whales. However, dolphins all over the world are dying from PCB (Polychlorinated Biphenyls) poisoning and other from pollutants we dump into the waters, such as heavy metals. Carcasses of whales are so polluted they have to be treated as toxic waste. The fool Japanese are eating these carcasses and, of course, are absorbing massive quantities of pollutants which will make them die slow hideous deaths of cancer.