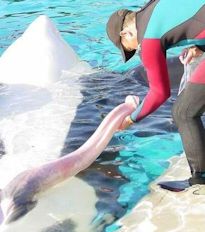 Why Free the Whales

The time has come to stop confining cetaceans in captivity.

Why Keep Whales in Captivity

Here are the reasons given by officials at the Vancouver Public Aquarium for keeping whales in captivity:

Note that all these reasons are benefits for humans, not benefits for the whales captured. It never occurs to their keepers to think of whales as intelligent individuals with a right to a pleasant life. They think of them as cattle whose only function is to serve man. The arguments for cetacean captivity are similar to those just to justify slavery. The arguments were only about the benefits to the slaveowners and considered the welfare of the slaves irrelevant.