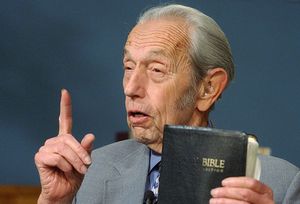 Through such scams, he amassed $120 million. His followers were encouraged to give him all their possessions so they will be penniless and rapture-ready. His followers are apparently unaware of the antiquity of this scam. Evangelist con men scammed tens of thousands in the year 1000. The victims had to live out the rest of their lives in destitution.

The victims are incredibly stupid. If an evangelist truly believed this crap, why would they be accumulating goods?