Tiresias
Tiresias is a family of especially easy-to-read fonts designed for people with visual impairment. They help people with perfect vision read more quickly and read smaller type faces without slowing down.

It aims for maximum legibility by making all the letters as distinct as possible, which, of course, makes it good for everyone. Tiresias was the blind seer of classic Greek literature. It looks like this: 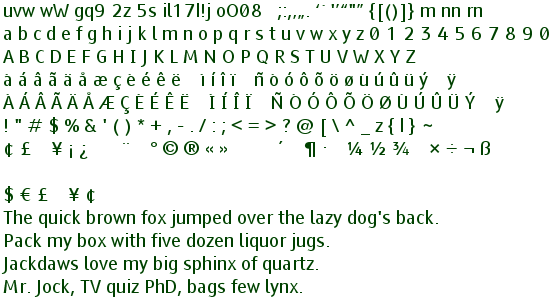 If you already have it installed, all the type on this page will look similar. It is the default font for my website.

Tiresias PCfont Z is the one you want. This website was designed with that font in mind. It supports nearly every character in the list of possible entities in the HTML cheat cheat except for &curren; ¤.

This site was designed using Tiresias PCFont Z as the body font, however, you won’t see it unless you buy it and install it. I suggest you install all the Tiresias free fonts and the free Fonts to get best rendering of this site on yoru browser.

You can buy download free versions of the Tiresias famil.

My main complaint with ScreenFont is that O and 0 are not distinct enough. The Tiresias fonts with a 'Z' after their names distinguish between the 0 and O by crossing out the 0 (zero). The letters have quite conventional shapes, unlike my proposed Proofreader font which has a similar purpose. The other problem is left and right quote look the same: “”.

The kerning in TiresiasScreenFont needs some work. Combinations like CO CC CP CE are hard to make out because the letters are too close together. These errors don’t cause much trouble except in Forté Agent Newsreader where they cause the rendering to sometimes go so totally screwy that you can’t continue editing.

The creators of the font has this to say about my complaints with the font,

Tiresias Screenfont was originally designed for subtitling use on digital television. It was designed for legibility at television viewing distances and constrained by space and resolution. So due to the scaling restrictions on TV screens, it was not designed for the intention of ever being used at small point sizes. We are aware there are a few kerning pairs (spacing between letter combinations) that still need rectification so we have noted your suggestion.
~ Tiresias Designers

I highly recommend downloading a free copy of Tiresias PCFont Z and using it as your default proportional font. It makes working with a computer so much more relaxing. I can’t think of a cheaper investment that has such high returns in comfort. You can download them from this site just by clicking on the name of the font above.

Unfortunately, the fonts are available only in TrueType format. They are locked, so even though they are public, they cannot be converted to other formats.

The Tiresias font does not do superscripts or subscripts well. I flip to another font for them.