I have some perhaps unique thoughts on McVeigh and his crime. I considered doing something similar and decided not to, namely killing a large number of Makah whale hunters, taking along some of their loved ones as collateral damage. I staged a slow suicide protest instead.

The Mind of The Martyr 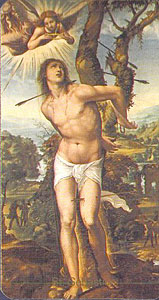 For me a whale is worth at least one hundred human lives and to kill a hundred humans to save ten whales would be very good deal. If I had to be one of the humans, oh well. McVeigh clearly felt much the same way about Waco.

I knew that if I carried through my plan, I would either be killed in the process, or would be executed later. That is just the price I would have to pay to save lives.

On the Internet, I had already tried fruitlessly to convince people why it was very wrong to kill whales. I argued that people ought to be even more furious about the whale sacrifices than had the Makah been hunting human children for something to lift their flagging spirits. The Makah justified the hunt by saying their long dead ancestors did it too. I countered that they also practised cannibalism. That does not make it right.

I knew I my mass murder would be considered insane and evil, yet, in my heart, I would know it was well worth it if, in the process, I stopped the whale hunt. I knew I would have almost no hope of persuading anyone of the correctness of my actions. Only those few people who have had close contact with cetacea would even begin to understand.

However, the crime and my subsequent execution would bring the issue to the front burner and then likely the hunt would stop forever. At the very least, future Makah whale hunters would be looking nervously over their shoulders for other maniacs like me.

Very simple. I abhor killing, period, human or whale. I thought long and hard for an alternative to my gut reaction that cried out for murder. Secondarily, I felt since I was inexperienced in such enterprises, I might be arrested quietly before I managed to do any damage. Worry about being killed, either during or later was not a concern.

Why Did McVeigh Do It?

McVeigh, on the other hand, went through boot camp, a type of brainwashing given to all soldiers. It breaks people down and rebuilds them. Why would a democratic country put its citizens through brainwashing, using techniques similar to those in POW (Prisoner Of War) camps or religious cults? We do this to all soldiers for several reasons: McVeigh was unusually susceptible to boot camp brainwashing. He became a model soldier, totally obedient and honour-driven.

Bent double, like old beggars under sacks,
Knock-kneed, coughing like hags, we cursed through sludge,
Till on the haunting flares we turned our backs
And towards our distant rest began to trudge.
Men marched asleep. Many had lost their boots
But limped on, blood-shod. All went lame; all blind;
Drunk with fatigue; deaf even to the hoots
Of tired, outstripped Five-Nines that dropped behind.

Gas! Gas! Quick, boys! — An ecstasy of fumbling,
Fitting the clumsy helmets just in time;
But someone still was yelling out and stumbling,
And flound’ring like a man in fire or lime…
Dim, through the misty panes and thick green light,
As under a green sea, I saw him drowning.
In all my dreams, before my helpless sight,
He plunges at me, guttering, choking, drowning.

If in some smothering dreams you too could pace
Behind the wagon that we flung him in,
And watch the white eyes writhing in his face,
His hanging face, like a devil’s sick of sin;
If you could hear, at every jolt, the blood
Come gargling from the froth-corrupted lungs,
Obscene as cancer, bitter as the cud
Of vile, incurable sores on innocent tongues,
My friend, you would not tell with such high zest
To children ardent for some desperate glory,
The old Lie; Dulce et Decorum est
Pro patria mori.

Dulce et decorum est pro patria mori is Latin for sweet and honourable it is to die for one’s country.

The army built a killing machine. It is thus no great surprise McVeigh was unusually efficient at killing people. It is also no surprise that McVeigh had the practical experience in killing to have the confidence he could carry off his plan without a hitch.

Obviously not all solidiers later take off on their own deciding who deserves to die. Most are obedient to external rather than internal authority. However, that military training is the key difference between McVeigh and I.

I ask myself, whose was the greatest crime?

McVeigh saw himself as a martyr. Dying was simply part of the deal to get the publicity needed for his cause. Was then the death penalty an incentive or disincentive?

It is a romantic way to go. McVeigh succeeded beyond his wildest dreams in his goal. His success will inspire future fanatics with passionate causes, just or nutty, especially those with unsatisfactory personal lives who might not be all that keen on living anyway. Why not kill two birds with one stone? What do you think motivates the suicide bombers in Jerusalem?

I did not follow the trial details. Presumably everyone is totally sure McVeigh acted alone though I can’t quite understand how that could be if this Terry Nichols character was charged as well for helping prepare the bomb. There was certainly enough effort and paper spent on the prosecution. It seems odd though to want to silence the prime witness for any future potential prosecutions in the case. Some witnesses reported seeing co-conspirators, according to the British newspaper, the Independent. The story has since been withdrawn. Now we likely never find out the full truth. Gore Vidal claims his researchers will soon have the name of five conspirators and that McVeigh himself did not do the deed, but grabbed the glory all for himself when he discovered he would be the patsy. Vidal is famous for his meticulously researched historical novels about American history. The Final Report written by a group chaired by Okalahoma Repesentative Charles Key similarly conclule there were more conspirators. I don’t claim to know the truth, only that the prime witness has been conveniently silenced.

How Do You Prevent Future Tragedies?

I have three ideas:

Getting Into McVeigh’s Head

My ideas I have expressed here are definitely off the beaten track, but then so was McVeigh. Here is McVeigh’s last written statement, a poem called Invictus by William Ernest Henley: 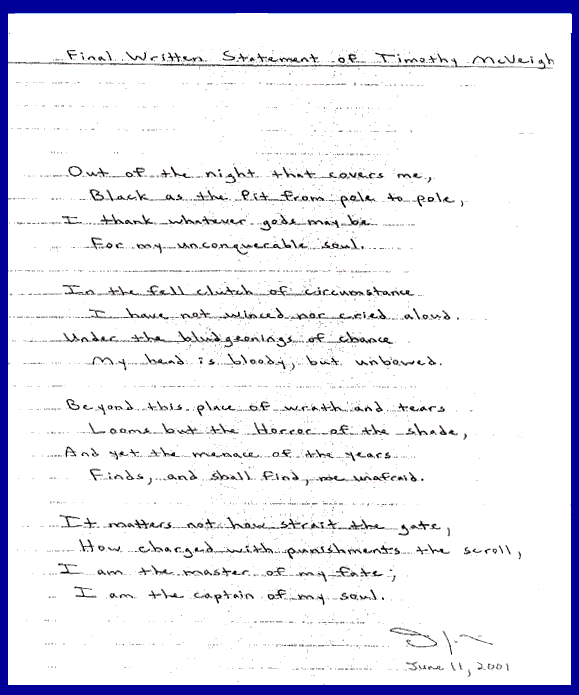 Out of the night that covers me,
Black as the Pit from pole to pole,
I thank whatever gods may be
For my unconquerable soul.
In the fell clutch of circumstance
I have not winced nor cried aloud.
Under the bludgeonings of chance
My head is bloody, but unbowed.
Beyond this place of wrath and tears
Looms but the horror of the shade,
And yet the menace of the years
Finds and shall find me, unafraid.
It matters not how strait the gate,
How charged with punishments the scroll,
I am the master of my fate;
I am the captain of my soul.
William Ernest Henley Invictus

Maybe I do have some insight into what makes him tick and what you can do useful to stop future tragedies.

On the 15th anniversary of the Oklahoma bombing, there was a flurry of renewed interest. Part of the interest was generated by the gun-toting assassination-threatening racist Tea Party, which is a sort of McVeigh light. At the end of one documentary called Final Report, was this question: What could transform Timothy McVeigh, a decorated veteran, into a terrorist?

Consider the definition of terrorism:

There was no transformation. The US Army trained McVeigh as a terrorist to kill civilians in the middle east in an attempt to get them to submit to American authority. McVeigh was already a trained terrorist when he returned from the Gulf War. He just adopted a new terrorist cause to kill for. Talk about chickens coming home to roost. The same holds true of McVeigh’s terrorist buddy from the Gulf War days, Terry Nichols.