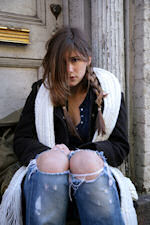 Why Is there Homelessness?

The most amazing fact about homelessness is the problem is not money. Jeff Bray, Liberal MLA (Member of the Legislative Assembly) admitted this. Why then are politicians reluctant to solve the problem? Of course, without clean clothes, a shower and a telephone it is almost impossible to get any job, but that never occurs to those who enjoy persecuting the homeless. Further, it turns out the homeless don’t move from city to city. They stay in the city where they first became homeless. They can’t afford to travel.

There are also homeless industry groups like the Salvation army, who would have little to do if the homeless were housed. From their point of view, the homeless are primarily fodder for conversion to fundamentalist Christianity. When people are desperate, they are most vulnerable to religious conversion. Homelessness is a really nutty issue.

My city, Victoria, has a second cause of homelessness. The vacancy rate is about ½%. This means even if all the homeless had full time jobs, about 2000 people would still have to go without housing. There simply is not enough housing for everyone. Further, the housing that is available is luxury housing. There is no mid and low range housing available at all. Apartments have waiting lists.

Homelessness has been increasing at about 10% a year ever since the federal government (and later provincial and municipal governments) stopped subsidizing low cost housing.

We provide the rent and Kraft dinner for thousands of people with welfare, but for the homeless, we steal their tents and belongings and give them nothing. Why the discrepancy?

There are not that many homeless people relative to the number on welfare. This is not a hard problem to solve if there were any will to end it.

Surprisingly, the problem is not money. It would be much cheaper to house the homeless than deal with the side effects of having homeless people wandering the streets e.g., over use of emergency hospital services, extra policing, lost tourism, spread of disease by untreated people, cleaning up feces…

The problem is Puritans who believe the homeless are lazy and must be made to suffer. They say get a job, as if there were abundant jobs awaiting. They completely forget most of these kids were physically and sexually abused by their parents or kicked out of their homes, perhaps for being gay. Others are mentally ill. Others’ lives have fallen apart due to drug and alcohol abuse. The current cruel approach has not worked in the least to make them shape up. It just kills them off. I was shocked at a huge wall of photos of street people who all died very young.

Here in Victoria former Mayor Lowe and councilman Geoff Young fall into that Puritanical category. Even the new mayor Dean Fortin has a smattering of it.

Thankfully, the new council has a majority of people who are sympathetic to solving the problem.

There are about 0.2% of the population homeless in the USA and a similar percentage in Canada.

The burden of caring for the homeless is embarrassingly light. It is downright undetectable. There is no problem with money. The problem is mean spirited people who enjoy punishing the homeless.

Further, the costs of housing the homeless would be less than what we do now locking them out in the rain like some besotted parents. Politicians admit this.

In the entire USA there are about 600,000 homeless people. The cost of feeding and housing all of them for a year is (not counting the savings from getting them off the streets).

To put that in perspective:

the cost of Medicare D is a year.

The Iraq war costs a year.

Banks got a bailout.

There are trillions (thousands of billions) of dollars missing in the Pentagon accounting ledgers.

Behold, this was the iniquity of thy sister Sodom, pride, fullness of bread and abundance of idleness was in her and in her daughters, neither did she strengthen the hand of the poor and needy.
~ Ezekiel 16:49

I went to a meeting hosted by an anti-poverty group that invited all the Victoria BC mayoral and city council candidates to speak and take questions from the audience on the topic of homelessness.

I told a story about buttonholing Jeff Bray, a provincial cabinet minister to get him to tell me why he thought homelessness persisted.

To my surprise, he acknowledged that it would be cheaper to house the homeless than pay for all the negative side effects of homelessness (e.g. increased policing, hospitalisation, lost tourism, lost business).

His take was that his supporters would resent paying to house the homeless. They would sooner spend more money than see them benefit. They simply did not like the homeless.

I described in a humourous way the typical good burgher’s rosy view of what it was like to be homeless and why they were envious and resentful of the homeless.

The other reason Bray gave was a fear that if Victoria solved its homelessness problem, it would attract homeless people from all over Canada and Victoria would be saddled with the cost of dealing with Canada’s entire homeless population.

I then asked the incumbent council members to tell me what results that had achieved in doing something about either of these two roadblocks to ending homelessness. I was not interested in what they were going to do, or even what they had done. What results had they achieved?

Their faces went pale. One guy was game and told how he worked in a soup kitchen. I considered this irrelevant, but at least the guy’s heart was in the right place. I let it pass.

Then Geoff Young got up and started blathering -- throwing out meaningless words. I shouted out in my extremely loud, terrifying voice, Answer the question. My height and somewhat rumpled demeanor helps with the effect. He responded that he did not accept the premise of my question So I asked him to sit down and let somebody else have a try who had done something. He sat down.

The amusing thing about Geoff Young is he more than any other person on council despises the homeless. He is the one who challenged a Supreme Court ruling allowing homeless people to sleep outside in city parks. He is the one who came up with the cruel idea they had to set up tents in the dark after 9PM and be out hours before dawn, which was a way to slither around the supreme court ruling.

His council ordered the police to confiscate the belongings of homeless people including tents and donated carts and to destroy them, hardly a great way to encourage people to get on in the world.

In his view, the homeless are human litter and decent people should not have to see them. It is the duty of homeless people to make themselves invisible.

It is illegal for them to pee or defecate outdoors, but there are no facilities where they can legally pee. One homeless person joked that he should borrow a cellphone and call 9-11 because he had a medical emergency — needing to urinate and he did not want to break the law.

I think these councilors were genuinely shocked by my question. We spend far too much time extracting empty promises from our politicians. Far more telling are past results or the lack thereof.

Every election, politicians promise to end homelessness, but they never do anything. Perhaps this is because police prevent politicians from enacting their preferred solution — burning the homeless alive with flamethrowers.

Here is BC the provincial government has an odd rule. They will give a month to a housed indigent person for rent and food. Given that rents in Victoria start about , (even higher in Vancouver) this makes it difficult, but it can be done with shared accommodation and eating nothing but wieners and Ramen noodles.

However, the government will not help an indigent homeless person. In many instances, the homeless even have to pay for their soup kitchen meals.

How do you upgrade a homeless person to a housed indigent person? From there the government will handle minimal rent and food.

Let’s say you had a non-profit society that in the off-season rented some motel units and packed them each with 3 homeless people. The homeless person would have 3 months to get on welfare. As soon as they were approved, they would have to move and free up the slot for another homeless person. If you rented ten units you might be able to convert 6 / 3 * 10 * 3 = 60 people a year. There are about 2000 homeless people in Victoria. You could cherry pick the best risks.

You would only run this program in non-peak periods, so you should be able to get pretty cheap rents.

Of course, this would only work if there were low cost housing for the homeless to migrate to. It would take several years for that to be available, even if funded today. In the meantime, we need to provide temporary housing in the form of tent cities. It is ridiculous to punish the homeless for a situation they did not create.