You guys are so fucken stupid. Abortion is killing dumb ass.

I never said otherwise. (By the way, I, Roedy, am the only one here.) I don’t think you ever read my essay on abortion. You misunderstand and misrepresent my position. I will restate it here in brief.

You’re for human rights, so how is an unborn child not a living thing. Anyone who believes abortion should be the decision of the mother is a terrorist you stupid cunt. They are a murderer, just think about it some more, you and your stupid mates don’t have a clue, but maybe someday you’ll grow a brain and understand that abortion is killing. I’m sick of stupid fuckheads like you that have these sites with contradictions. You either agree with killing people or you don’t, I don’t agree with killing people, but you do, you agree with abortion, but then you prance around the world like you’re a saint, saving everybody’s lives. People like you are so fucken dumb.

Your accusation is illogical, even if I were in favour of abortion as you allege. If a PETA (People for the Ethical Treatment of Animals) advocate told you that since you did not agree eating chicken or eggs was murder, you had no right to protest abortion, you would dismiss them as a lunatic. Surely you agree that killing adults and children is wrong. Yet you chastise me for protesting those murders. That makes no sense. I have not pranced for many a year, so that accusation too is fanciful. Further, I can’t recall ever claiming sainthood. Far from it; I am a gay lib pioneer and hold religion in contempt.

Nearly everyone agrees that killing a blood cell is no big deal and killing a new born the equivalent of killing a full blown adult. However, a human goes through many intermediate stages between a single cell and a newborn. There is no obvious way to decide how to graph severity from 0 to 100% murder over that term. Intelligent people do it differently.

Personally, given nothing better to go on, I would interpolate linearly, drawing straight line, so that killing a fetus at the half way point, at 4.5 months should count as a crime 50% a serious as killing a newborn. Here is how you might graph my position. Months of pregnancy term run along the bottom as the x-axis. Percentage of severity of a murder runs along the left on the y-axis. 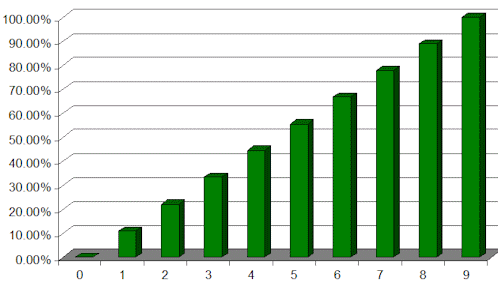 Pope Razinger considers any form of pregnancy termination at any stage as murder. I suspect you subscribe to his view. You could graph his position like this: 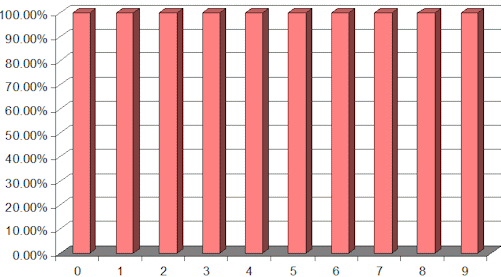 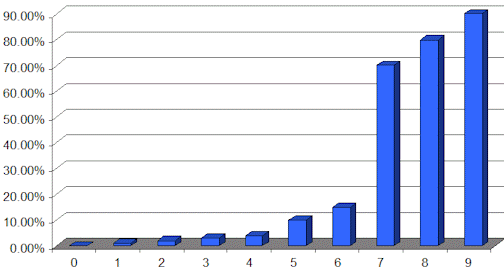 There are an infinite number of ways of filling in the intermediates. People will never agree on how serious killing various ages of the unborn is because it is arbitrary and determined mostly by infinitely stubborn, irrational, arbitrary religious belief. There is no way rational argument will ever solve this. The only way out of this logjam that I can think of is to make abortion obsolete by developing near perfect birth control. The big problem with that solution is many religious people are also opposed to any form of birth control. Their religions evolved in times quite different from today. Today overpopulation threatens us far more than lack of fertility.

I suspect even with this explanation, you still won’t understand my position. You are a fanatic who imagines that you have hold of absolute truth, when in fact all you have is a strong opinion based on nothing more substantial than what you were told as a child.