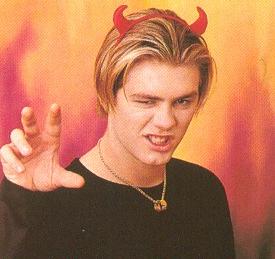 The popular image of evil is some sexy guy who skulks around in the dark and performs incantations in ringing tones reminiscent of the late Richard Burton. My image of evil is much more mundane. Evil is simply making choices that cause others to suffer.

Most people cause the most suffering for others unintentionally. They may realise on some level they are doing it, but conveniently forget the consequences of their actions. Because nearly everyone else in their society is doing those same actions, they excuse themselves. What am a talking about? Here are a few examples of modern day evil:

Destruction of the Ecology

People do all sorts of things that degrade the environment and push it ever closer to collapse. Such things include:

Destruction of Our Food

In the name of profit, companies sell apple juice that contains no apples and lemonade without lemons. They irradiate fresh food which reduces its nutrition to the equivalent of cooked food. They introduce all manner of untested chemicals as pesticides and additives. Genetic modifications have drastically reduced the nutrition of food in the last 50 years, all in the name of profit.

What is the matter with people that they meekly put up with this nonsense?

Chickens are raised in the most appalling conditions with their feet wired to the bottoms of cages and their beaks clipped. They are packed so tightly they cannot even turn around. Yet people continue to buy eggs and poultry raised this way rather that paying a few cents more for free range chickens that have a little room to move.

The actions of tuna fishers are decimating the dolphin populations. Tuna companies put phony dolphin-friendly labels on their tuna, but kill just as many dolphins. People continue to purchase tuna knowing fully well they are forcing the dolphins to extinction.

Cattle are fattened in feed lots packed so tightly the animals are covered in feces. People close their eyes to this institutional cruelty done in their behalf. Veal are raised in tiny pens never once seeing the light of day.

Companies like Nescafé squeeze the third world to produce coffee and chocolate at slave wages. People buy it knowing full well Nescafé’s reputation and the dirty tricks they pulled with infant formula that killed thousands of babies. People flatly refuse to pay fair trade prices for goods from the third world. Talk about kicking someone when he is down!

Very few people do anything at all to help people in the third world, not even sponsor a child. People have no sense of proportion. They see as absolute necessity some toy or bauble, where providing water, medicine or food for a child in the third world is an entirely optional luxury.

If the politicians you elect start wars, stomp all over small third world nations, or enact regressive environmental and energy policies, it is your fault. They could not do that had you not given them permission to.

Christians in particular seem to think they know what is best for others and meddle uninvited into others’ affairs. If they can’t meddle directly, they enact laws to meddle on their behalf. For example:

Why Do People Sin?

The traditional Christian view of evil is a complete red herring. Thinking about sex does not hurt anyone else. Praying to the wrong god does not hurt anyone else. Failing to believe in the mumbo jumbo of some particular Christian sect hurts no one else. What does hurt them is polluting their air and water, screwing up their climate and forcing them to work for slave wages. The most horrendous animal abuse is legal, sanctioned and happens behind closed doors. It is a bit like the way the good German burgers pretended nothing untoward was happening to the Jews even though they knew perfectly well that was not so.

We have swallowed the notion that corporations need have no other morality than to maximise profit. Maximising profit usually means encouraging conspicuous consumption and waste, hardly in line with preserving the environment. Unfortunately, it seems, most people have swallowed this as a personal morality as well.