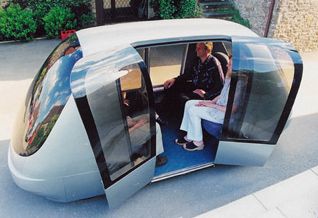 As time passes, driverless cars will be lighter, faster and simpler because they will not have to deal with unpredictable humans. Other driverless cars will keep them up to the millisecond on their intentions. Trucks now are driving the highways guided by artificial intelligence. The truck drives off the highway where a human driver takes over for city driving. I hope we soon get a standard for driverless cars to communicate with other trucks and the road bed to get road condition information, upcoming hazards, congestion… Driverless cars are coming. Not that long thereafter, it will be illegal for humans to drive cars on public roads as too dangerous. This will be a mixed blessing:

People will equip their driverless cars to keep them entertained on trips. They will watch TV, movies, DVDs (Digital Video Discs), news channels, listen to music, have sex, sleep, play games, browse the Internet, shop electronically, talk on the phone, do office work, eat, drink alcohol, groom, bathe…They will do many of thing they currently do at home, at the office or in brick and mortar business establishments. Travel time will no longer be automatically considered down time.

Even more than driverless cars, driverless taxis are coming. Even now, using taxis is cheaper than owing your own car. The economic case for taxis will widen for the following reasons:

carfree.com
Going carless
Why Refrigerators Are More Efficient Than Cars